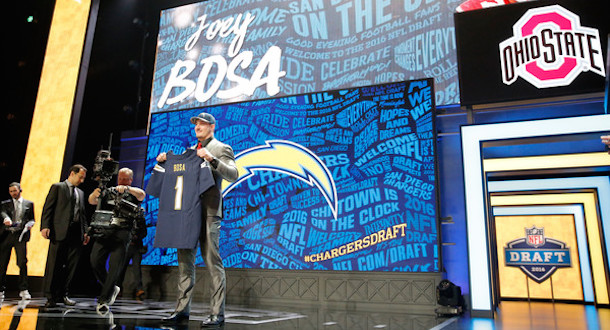 Which players could be surprise picks in the first round of the 2022 NFL Draft? We take a look at five guys worth watching.

Hill should go in the first round, but playing safety might drop him into the top of the second round. The Michigan product has the ability to go sideline-to-sideline, something that should play well in today’s pass-happy NFL. Towards the end of the first round, there are teams who could use a starting safety including the Tampa Bay Buccaneers, Kansas City Chiefs and New England Patriots. It’ll be intriguing to see where Hill lands in a class loaded with defensive playmakers.

Ritter shouldn’t go in the first round if we’re talking about value on the big board. However, when you factor in the position he plays, Ritter has a decent chance to be one of the first 32 picks. While he probably won’t go to a quarterback-needy team early on such as the Pittsburgh Steelers at No. 20 overall, a team could trade back into the first round once we reach the final few picks. The Detroit Lions are one option, while the Seattle Seahawks are another prime candidate.

Moore is the first of two receivers we’re going to discuss, in a class loaded with them. Moore comes from a small school but he has both terrific quickness and speed in the open field. Moore isn’t going to go ahead of receivers such as Garrett Wilson and Chris Olave from Ohio State, or Jameson Williams from Alabama, but Moore could be in the top five of the position should a few general managers love his upside.

A junior for the ACC’s best program, Booth enters the NFL Draft on the edge of the first round. It’s not a terrific class at the position, with Sauce Gardner, Derek Stingley Jr. and Trent McDuffie as the three worthy of top-15 choices, and then a gaggle of men trying to be fourth. Booth plays a premium position, and there are a litany of teams towards the back end of the first round who needs corner help. Watch for Booth to go on Day 1.

Watson shouldn’t have true sleeper status at this point, but he’s still a bit of one as a small-school star. Watson has the size (6-foot-4, 208 pounds) and speed (4.36 40-yard dash) to be an elite talent at the next level. This draft is packed with receivers, but Watson has the upside to match any of them.