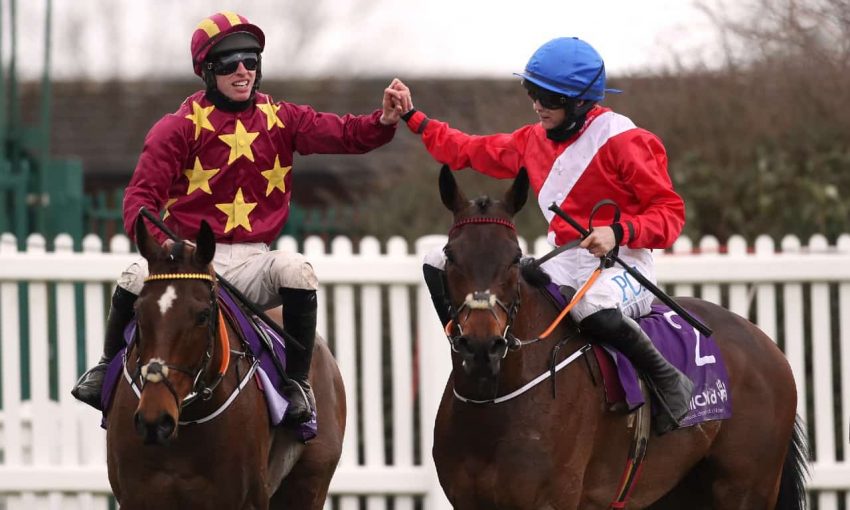 A look at the Cheltenham Gold Cup odds

The Cheltenham Gold Cup is the world’s most prestigious National Hunt race and the highlight of the four-day Cheltenham Festival.

Irish trainers have taken home the trophy in five of the last six seasons and Henry de Bromhead saddled his first Cheltenham Gold Cup winner with Minella Indo in 2021.

De Bromhead is responsible for the favourite once again, with the defending champion also high up in the market.

With the runners and riders revealed for the big event, it is the ideal time to analyse the contenders for the Festival’s blue riband event in our look at the Cheltenham betting.

Despite suffering defeat in the Savills Chase over the Christmas period, the eight-year-old former Cheltenham Festival winner still finds himself at the head the Cheltenham Gold Cup betting.

That is possibly due to the deep impression he created on his seasonal reappearance at Haydock where the son of Kapgarde sauntered to a 22-length success under Rachael Blackmore as A Plus Tard became the first Irish-trained winner of the Haydock Grade 1.

He lost little in defeat at Leopardstown at Christmas, plotting a far from ideal outside course during the race, before having his pocket picked in the shadow of the winning post when victory looked his. Sent off the 100/30 second favourite for the most recent renewal of the Gold Cup, De Bromhead’s charge only had his stablemate Minella Indo ahead of him as he came up a length-and-a-quarter short.

Best when kept fresh, he heads to the Cheltenham Festival with a leading chance of making it second time lucky as the eight-year-old and Blackmore look to correct the record.

Hot on the heels of A Plus Tard in the Cheltenham Gold Cup betting is Galvin, having got the better of De Bromhead’s charge in Dublin over Christmas.

He was given a fine ride by Davy Russell on that occasion, with his stamina reserves coming to the fore in the closing stages. However, he also has an underrated turn of foot and it will be interesting to see how he measures up in the blue riband.

A winner of the National Hunt Chase at last season’s Cheltenham Festival, he was seen as more of a Grand National contender at the beginning of the season, but there are no doubts now that he is Elliott’s main hope for the Festival showpiece.

Another who will head to Prestbury Park fresh, he has all the attributes to be a bona fide Cheltenham Gold Cup contender and will attempt to give the Cullentra House handler a second Gold Cup success.

The defending champion will be many people’s idea of the Cheltenham Gold Cup winner once again and following his pleasing run in the Irish Gold Cup there is optimism that he could come to the boil where it matters most.

Before that the nine-year-old failed to sparkle in first-time cheekpieces in the King George and was one of the first horses beat in a race run at breakneck pace.

However, he now heads to Prestbury Park in much better form than 12 months ago and Minella Indo often saves his best for the spring where the Gloucestershire air improves the dour stayer 10lb.

De Bromhead is sure to have him primed for the big occasion and supporters of the champ will be optimistic of a bold title defence.

🏆 @HenrydeBromhead has won the ‘Holy Trinity’ at the Cheltenham Festival with a one-two finish!#ITVRacing#CheltenhamFestival pic.twitter.com/ndc7njTGvO

The shortest British-trained runner in the Cheltenham Gold Cup betting, Dan Skelton’s progressive six-year-old made a real impression when destroying the field in Aintree’s Many Clouds chase on his first try at three miles.

That was the gelding’s second Graded success at the Merseyside track as he left former Gold Cup winner Native River trailing 25 lengths behind in second.

It is easy to throw stones at the form, but he fits the ideal profile for this race being unexposed at the distance and a lightly-raced chaser and it wouldn’t be the biggest shock to see him involved at the business end.

The Gold Cup winner in both 2019 and 2020, Willie Mullins’ star stayer could only finish third when sent off favourite to land the hat-trick in 2021.

He lost little in defeat as he rounded off an Irish one-two-three, with drying conditions arguably favouring his De Bromhead-trained rivals on the day.

He made his signature winning return at Tramore on New Year’s Day, landing his fourth straight victory in the Savills New Year’s Day chase, and with many Gold Cup candidates failing to overly impress in their trials, the two-time winner can’t be overlooked in the Cheltenham betting. Mullins is also represented by Tornado Flyer, who propelled himself into Gold Cup contention by winning the King George on Boxing Day,

That is often regarded as the best Gold Cup trial and he remains unexposed over staying distances, with his Kempton victory just the second time he had competed over three miles in his 18-race career.

Third in the Ryanair Chase in 2021 and also placed in the Champion Bumper, his Cheltenham form is far from the worst, but there will remain some doubts about the validity of his Christmas Grade One success due to the reckless pace set in the early stages and his jumping will have to be foot perfect with 22 obstacles standing in the way of glory.

Seven Barrows’ sole runner in the blue riband at the Cheltenham Festival, Chantry House was less than impressive when winning the Cotswolds Chase on Cheltenham Trials Day.

That was on the back of a bitterly disappointing showing when sent off favourite for the King George on Boxing Day and although now a three-time winner at Prestbury Park, there is a real worry that he’ll be taken off his feet by the breakneck speed the Cheltenham Gold Cup will be run at. Venetia Williams is enjoying a fine season and her ace staying chaser is given a second chance to land Gold Cup glory, with nothing going right in this contest for the eight-year-old 12 months ago.

A Haydock specialist, he gave A Plus Tard’s Betfair Chase win some substance when carrying top-weight to victory in the Peter Marsh on Merseyside in mid-winter, but could only finish second in the Denman Chase at Newbury and looks to have a bit to find to get in the mix, for all this is an open year.

The last of Mullins’ three contenders, this enigmatic grey has threatened to land a huge prize over the years, but always finds a way of throwing his chance away.

He was a faller at the last fence in the King George when gaining on Tornado Flyer with every stride, while he unseated his rider three out when travelling best in the John Durkan at Punchestown before that.

If he puts all together on the big occasion, then a Cheltenham Gold Cup shock from this eight-year-old wouldn’t be out of the question. However, there are plenty of fences and ground standing in his way and Bryan Cooper will have to be at his very best to steer him into contention. Second in the race in 2020 and placed at three Cheltenham Festivals when trained by Nicky Henderson, Polly Gundry’s stable star proved he still had plenty of fire in his belly when chasing home Chantry House in the Cotswolds Chase.

His price is about an accurate reflection of his Cheltenham Gold Cup chances but he has course-and-distance form in the book and could defy his years to get a long awaited Cheltenham Festival victory.

The rank outsider in the Cheltenham Gold Cup betting is Aye Right, but the consistent staying chaser is more than deserving of his shot at the big time.

He rarely runs a bad race and although extremely unlikely to make this tilt at the blue riband pay, he is unlikely to disgrace himself for his likeable northern connections.

What does it take to win the Cheltenham Gold Cup?

How to bet on the Cheltenham Gold Cup