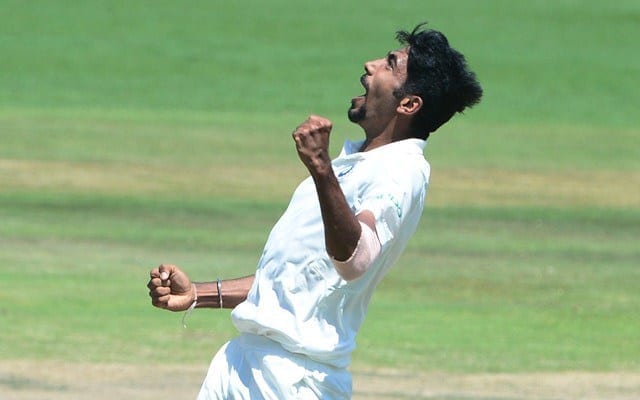 England have plenty of work to do after reaching stumps on a rain-affected day two of the delayed fifth Test with India at Edgbaston, as they still trail the tourists’ first innings total by 332 runs (England 5/1, India 4/9, Draw 7/2 – Match Winner).

India had resumed the day on 338-7, but they soon went beyond the 400 mark as Ravindra Jadeja (104) completed his century, while Jasprit Bumrah crashed Stuart Broad for 35 runs in an over – the most expensive over in Test history.

Bumrah then had England toiling with the bat, as he bowled Alex Lees (6) before having both Zak Crawley (9) and Ollie Pope (10) caught at slip, but India’s progress was delayed by persistent stoppages for rain, the third of which lasted for two hours.

However, with the sun finally breaking through, India’s bowlers continued to put the pressure on during the final hour of the day, with Mohammed Siraj taking the crucial wicket of Joe Root (31) before the impressive Mohammed Shami dismissed Jack Leach (0) – both of those players were caught behind by Rishabh Pant.

England were eventually grateful to close the day on 84-5, with a resilient Jonny Bairstow, who made a diligent 12 off 47 balls, and captain Ben Stokes still at crease.

Those two players are going to have to produce plenty of heroics on day three, similar to the 179-run partnership they enjoyed during last month’s Test victory over New Zealand at Trent Bridge, if they are to remain on the coattails of India.

Speaking after the close of play, James Anderson, who was the pick of the England bowlers during India’s first innings, posting figures of 5-60, acknowledged his side have work to do, but it is not the first time they have had their backs against the wall this summer.

“Sometimes you have to take your hat off to the opposition and obviously they have bowled well,” Anderson told the BBC.

“It can be difficult when you have so many rain delays it is which team can cope with that best and they probably nudged us on that today.

“We have been in tight spots this summer and have always had people who would put their hand up and try and get us back into the game. We have got plenty of guys in the dressing room who will do that tomorrow.”