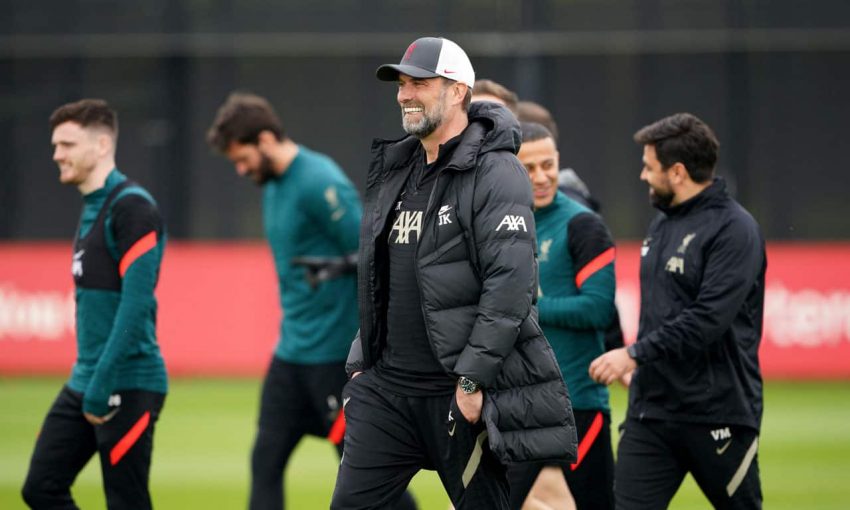 Jurgen Klopp is refusing to concede defeat in the Premier League title race and will hope to put pressure on leaders Manchester City as we pick out some Aston Villa v Liverpool betting tips.

Liverpool’s 1-1 draw against Tottenham on Saturday means the Reds start the week three points behind City in the title race with an inferior goal difference but there could still be more drama to come in the last three matches.

Tuesday’s match at Villa Park kicks off at 8pm and is live on Sky Sports.

Reds on the ropes

Liverpool’s chances of overhauling City, who have only the title to focus on after their dramatic Champions League exit to Real Madrid, were always balanced on a knife edge as they knew one slip-up would probably mean their hopes were over.

Tottenham were seen as the biggest challenge of their remaining four matches and so it proved as Antonio Conte brought a disciplined game plan to Anfield.

Son Heung-min’s 20th goal of the season gave Tottenham the lead and although Luis Diaz’s 74th-minute equaliser limited the damage, the Reds could not find a late winner.

😬 It’s going right to the wire at the top and bottom pic.twitter.com/yd9dq8357n

The draw – the first time Liverpool had not won at home since October and only the third time they had dropped points in 2022 – felt like a defeat such is the small margin for error at this stage of the season and City’s 5-0 win against Newcastle was a further blow to Liverpool’s title hopes.

Klopp remains defiant though, saying: “As far as they (City) are not reachable, why should we stop believing? There are obviously different perspectives.

“We can take it as it was and say ‘We drew, they won’. It makes it three points and the goal difference has changed obviously as well.

“Or you see it like this; that we were six points behind and they lost and we won and the rest is exactly the same and we would be flying and couldn’t wait to play Aston Villa and bring the next three points.

“As human beings, we can decide for ourselves how we see it. There are some facts but we are allowed to ignore them.

“I try to help the boys, to see it like me and invite everyone else as well: let’s just assume that we won the last game and they lost.

“It doesn’t make the Aston Villa game a little bit easier, not at all, but it gives you a nicer perspective and that’s what is important as well.”

“My possible successor? Yes…” 👀#LFC boss Jurgen Klopp says their former captain, Steven Gerrard, could be his successor at the club 🔴 pic.twitter.com/uJvyMDQ9jX

Liverpool are 4/9 to get back to winning ways but there are ways to back them at bigger odds in Aston Villa v Liverpool betting tips.

Gerrard out to stop former club

Steven Gerrard is expected to manage Liverpool one day but for now he is looking to effectively end their title challenge.

Gerrard may be hugely popular at Anfield but his current focus is on Villa building on Saturday’s impressive 3-1 win at Burnley which left them 11th in the table.

Villa are 6/1 to cause an upset and 9/5 to avoid defeat, with Gerrard urging his players to embrace the challenge of facing Liverpool.

He said: “Liverpool are a world-class team, arguably the best team in the world right now. We’re well aware of the challenge.

“I’ve spoken many times about how I respect the coach and the coaching staff there. You either fear that or you put your shoulders back and try to take it on and find situations where you can have your moments in the game. “Every team on the planet, historically or now, there’s always areas or situations that happen in a game where you can hurt them.

“We’re well aware of the size of the challenge, but it’s exciting and I’m looking forward to it. Big games of football are what it’s all about.”

Villa only lost 1-0 at Anfield in December thanks to a Mo Salah penalty and were incredible 7-2 winners in this fixture last season.

Nobody would suggest a repeat of that crazy scoreline in Aston Villa v Liverpool betting tips but over 3.5 goals is an option at 29/20.

Villa have struggled against the current top eight this season, only taking points off Manchester United, and in seven home games against such opposition they have conceded 19 goals.

They could be exposed by Liverpool’s formidable forward line and Salah, Diaz and Sadio Mane all to have at least one shot on target is an option in the #YourCall markets at 19/20.

Salah can also be backed at 7/1 to score in both halves or the same price to score and have an assist.

Jacob Ramsey remains out for Aston Villa with a groin injury but could return for the weekend’s game with Crystal Palace.

Leon Bailey’s ankle injury will also keep him sidelined, with Gerrard expected to have a similar squad to the weekend.

Forward Roberto Firmino is set to return to the Liverpool squad. The Brazil international has missed the last six matches with a foot problem but had additional training over the weekend to get him back up to speed.

Changes are expected with Joel Matip likely to come in at centre-back, while Kostas Tsimikas may be given a rare start on the left of defence in order to rest Andy Robertson.