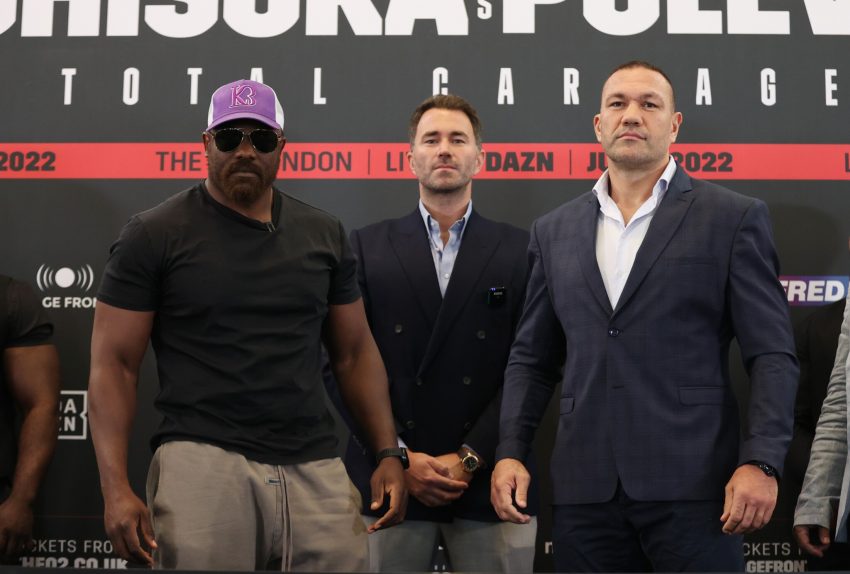 Big time boxing returns to the O2 Arena on Saturday as Derek ‘War’ Chisora looks to avenge his 2016 loss to Bulgarian Kubrat Pulev.

Both fighters find themselves on the outskirts of the heavyweight division, with a win for either potentially catapulting them back to relevance and another run at the most glamorous belts in boxing.

Their first, in 2016 which took place in Hamburg, ended in a split decision for ‘The Cobra’ as he picked up the vacant European heavyweight title.

Pulev has only lost one fight since, that was to Anthony Joshua in December 2020. In fact, he’s only lost two fights in his entire career, the other being to Wladimir Klitschko back in 2014, so it will take a big performance from Chisora to get the victory here.

Despite enjoying a career renaissance in recent years, ‘Del Boy’ comes into this one off the back of three straight defeats, which adds up to 12 defeats across his career.

If he’s to get the victory, he surely has to stop his towering Bulgarian and Eddie Hearn likely thinks so too, promoting this one as ‘Total Carnage’ and throwing in numerous mentions of the ‘war’ to come.

Pulev may throw a spanner in the works though with his jab and grab style, meaning it could take Chisora getting somewhat lucky with a huge, and often reckless, overhand right.

He didn’t in their first encounter, leading to a split decision loss, but at 41, it’s unclear just how much Pulev has left in the tank.

On the other side of things, only Dillian Whyte, David Haye and Tyson Fury have managed to stop Chisora, so if he’s up to his usual standards, it’s unlikely he’s going to be taken out before the final bell.

With all that said, we can’t look beyond a decision victory for Pulev in this one, as we don’t believe Chisora will be able to get to him enough, therefore we think the following bets could be smart.

Check out the FULL markets for the fight HERE.