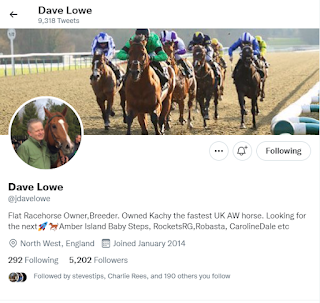 We’d like to thank Dave for taking the time to forward his 10 horses to follow for 2022. There have been a number of talents to run in his familiar silks and he has excelled with David Loughnane at Helshaw Grange. Last year saw a wealth of talented two-year-olds including: Mojomaker, Augmentarium & Spacer. There will be winners a plenty this season so make sure you follow their journey.

The first two we expect to be early types the unnamed pair we’re giving more time but we are happy with all 4 at the moment .

First runner will be Absolutelyflawless who will be aimed at getting the Tatts £20 bonus as bought there from book one. Robasta bought from Ian balding at the HIT sales he was running in the best company as a 2yo & they upped him in trip Dave [Loughnane] has tweaked a few things and we think he’s a sprinter really. He has an entry on Saturday at Wolves we really like him.

Spacer lovely grey horse won as a 2yo for us very nice type we expect to progress.

Mojomaker ran in the top races as a 2yo now gelded & had a wind op we think he’ll progress as a 3yo a very straight forward horse.

Sharron Macready ran a lovely race first time out at Wolves we’ve been easy on her and she’s had a minor op to remove some floating bone she’s fine now & she’s tons of ability and an exciting prospect this year.

Augmentarium another filly we like, she won her maiden in good style at Kempton last year, another we’re expecting big things from this term.

Special thanks to Michéal Orlandi who sources my horses at the sales & Dave Loughnane.