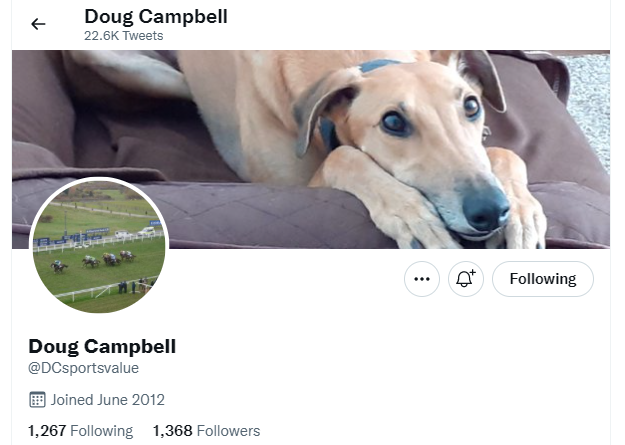 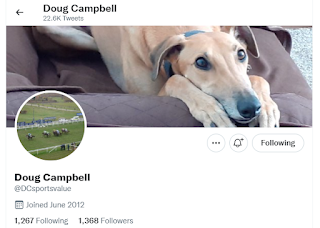 Thanks for Doug Campbell taking the time to forward his 10 to follow for the 2022 season.

Audience took a Novices contest over seven furlongs on his only start last year at Newmarket in late October, beating the Charlie Appleby trained Yantarni by almost four lengths quite readily. His other half siblings, by Dutch Art and Acclamation were both best suited to sprint trips – and whilst Audience certainly doesn’t look short of pace, it also wouldn’t be the biggest of surprises if he stayed a mile – given the manner of his Newmarket win. Yantari went on to receive an opening mark of 80 , so one would have to hope that Audience himself can progress to be something better than a handicapper.

Collected a late season Newmarket maiden over seven furlongs, despite becoming upset in the stalls beforehand – making all , and running well in the final quarter of a mile to hold the Hugo Palmer trained Arion by two lengths. Should benefit from a winter behind her and looks open to improvement as she gains experience. Bermuda gave the impression that she will stay a mile and is sure to be placed to the best of her ability.

Unraced at two and bred to be suited to trips of around ten furlongs or so. Deferred is a half brother to the Varian trained four times winner – Invitational , who was successful in Listed company in France back in 2019. Will hopefully pay his way over the course of the season, but may well be one more for the second half of the campaign. Will follow his progress with interest.

Could well prove a nice buy at 60,000 Gns as a yearling. Emily Upjohn has won her only start to date – a Novices contest over nine and a half furlongs at Wolverhampton in November, beating the previous winner and 88 rated Secret Image by a neck in a driving finish. It looked a decent first effort, despite a little sign of her inexperience. Emily Upjohn is open to plenty of improvement, particularly when faced with a stiffer test of stamina. Will be disappointed if she doesn’t pay her way during 2022.

By the second season sire Ulysses, out of a dam that carries the Cheveley Park bloodlines back for generations. Kirilenko has shown a fair amount of ability in two outings so far, over what appeared inadequate trips – and looks too good to remain a maiden for much longer. A respectable fifth on her debut at Newmarket in October, after failing to gain the clearest of runs, and a fair third of fourteen at Kempton in the first week of November – despite still showing some signs of greenness. Both starts came over seven furlongs and I would imagine she will require a minimum test of a mile and a quarter at three to be seen at her best. Could well be a fair bit better than her bare form at present.

We only got to see Rendtition just the once in 2021, when finishing fifth of thirteen behind Last Ammo at Wolverhampton over one mile one and a half furlongs. Held up towards the rear of midfield, she stayed on inside the final furlong after showing some signs of greenness in the home straight – eventually being beaten almost seven lengths behind the winner. A winter behind her and a few more races under her belt should see the filly in a better light, she is likely to stay a mile and a half and winning opportunities should be found. Is is interesting to note that her owners purchased her for just 20k euro as a foal, and given that they stand her sire it may well prove significant.

Rock Siren is the second unraced choice to make the ten, the third by Ulysses and the fifth owned by Cheveley Park. On pedigree alone she didn’t really appear the type to excel at two so it was no surprise to see connections wait until this year. Middle distances are likely to be the order of the day, and hopefully she can be placed to win in maiden or novice company before moving on to something better. She’s a half sister to two winners – the best by some way was the Listed placed Sound Of Cannons, who was runner up to Pyledriver in 2019.

Winner of her only start at two, beating Beautiful Secret by a neck over a mile at Doncaster in August. Why she didn’t race after that – I’m not too sure, however the going did appear a little on the quick side that day and I’d be guessing that her connections may not wanted have wanted to potentially hinder her long term prospects. The form of the race worked out quite well with both the runner up and the third placed ( Kick On Girl ) winning the following month. Suspicious looks the type open to improvement at three, and will stay middle distances. It would be nice to think that she will prove capable of a much better level this year.

Runner up to another of the ten – Audience – on his racecourse debut, before a third place behind Security Code at Wolverhampton, and a second spot behind Wineglass Bay at Southwell in December – earning him an opening handicap mark of 80 for 2022. It is interesting to note that Yantarni was gelded in January, and that may just bring about some improvement. He should be placed to win in maiden or novice company before tackling handicaps.and appears to stay a mile.

Made a very promising start to his career at the end of November, when coming from off the pace to win at Lingfield, with more authority than the half length margin suggested over Al Marmar ( a winner next time out ) , and followed up that win with success at Chelmsford in December, beating Mr Big Stuff by a length and a half ( probably value for more ) to start the 2022 campaign on a mark of 88. That looks a fair opening rating, but one that he can improve on as he gains experience an steps up in distance. His sire was top class over a mile and a half, while his dam was a Listed winner over ten furlongs and those are the sort of trips that should ideally suit Yonafis at three. A really likeable type in the making.