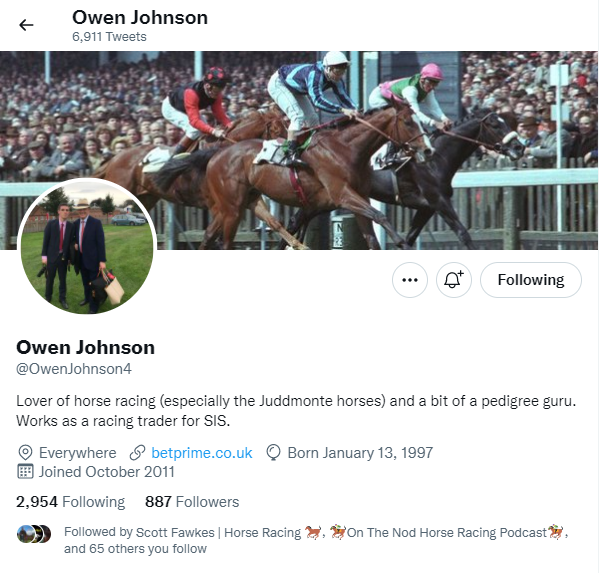 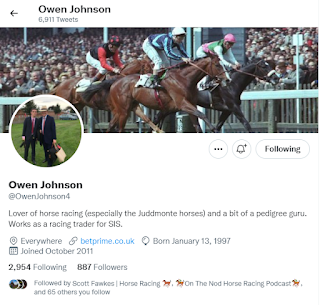 “I thought we’d get the obvious out of the way to begin with but this big slab of a colt by Oasis Dream did everything you could have asked for as a two-year-old. Unbeaten and winner of both the National Stakes and the Dewhurst it’s easy to see why he’s the highest rated two-year-old from last year. However, you could say earlier in his life it was more of a humble beginning as he was picked up for just 67,000 guineas at book 1 in 2020 by Margaret O’Toole / Oak Tree Farm which was a surprise given his deep Juddmonte pedigree. But the breeze up buyers were all over him and was eventually knocked down to Godolphin for 210,000 Guineas and interestingly his half-sister by Kingman was also bought by Godolphin for 950,000 euros at Arqana. I’ve already backed him for the 2,000 Guineas last year at 16/1 E/W and now he sits as 3/1 favourite which is a nice position to be in, and I would be disappointed given his size that he didn’t train on as a three-year-old and maintain his high standards that he has set already.”OJ

“This son of Dubawi made an eye-popping debut at Nottingham towards the backend of the turf season. After being slightly slowly away to begin with he found his feet and drew clear in style to win by five lengths. The word seemed to be out about him as well as he was well backed from 3/1 in the morning into an SP of 13/8. Bought for 480,000 guineas at the rearranged Arqana Breeze Ups he certainly went some way in showing why he was worth the money that was splashed on him. He is out of the mare All At Sea who was trained in France and she wanted soft ground and maybe that will be the ground Eldar Eldarov wants, coupled with the fact that I think Dubawi’s progeny are generally better with a bit of cut that could be his scene but that is generalising and from what I saw on debut I’m expecting big things from this horse this season.”OJ

“This horse came to my attention before he even hit the racetrack as I was watching the Gosdens string come past me at the bottom of Warren Hill, and I bumped into one of many of their assistant trainers. I asked him what his best unraced horse was, and his immediate reply was Antarah. The son of Sea The Stars certainly didn’t let the stable down on debut or Jim Crowley (who drove for 12hrs just to ride him) which was incidentally at Newcastle, a track where the Gosdens like to send out a nice newcomer. He blobbed away in behind for a few furlongs before Jim let him out and the response was pretty immediate and, in the end, he was eased down at the line. Like Eldar Eldarov I’m expecting big things from him.”OJ

“This beautiful looking son of Night of Thunder is owned and indeed sourced from the same place as Eldar Eldarov as a two-year-old for £215,000. His first start at Haydock was encouraging when second to Albahr who has won twice since, including a Grade 1 win in Canada. I then backed him on his second start at Ffos Las in which the market screamed in his favour, however he bumped into a certain Harrow that day and bumped is the right word as both horses got into a bumping match from a furlong out with Harrow coming out on top who has subsequently won twice since at the Ebor and St Leger meeting. Tylos himself then got off the mark in a Novice at Wolverhampton in comfortable style from Withering who interestingly as I write this won yesterday in Meydan. He’s one to look out for in the early part of the season and his mark of 87 looks very lenient in my view.”OJ

“Another horse who looked above average in a Kempton Novice and he got the better of the odds on favourite Western Writer when readily going away to score by three lengths. However, it was afterwards that made me prick my ears up as Andrew Balding said: ‘ If you’d have asked me what our best two-year-old was in the summer it would have been him’. In addition, Cieren Fallon who was the jockey onboard Nobel was interviewed on Instagram by Frankie Forster and was asked for a horse to follow and he immediately nominated this horse. By Lope De Vega (as we’ve said a sire who the trainer horses do well) out the Sea The Stars mare Starlet and was purchased at Book 1 for 825,000 guineas, which looked a bit hefty at the time but possibly turn out to be a good buy if the hype is to be believed.”OJ

“Now this is an interesting one as he’s been backed on all his three starts, especially on debut when not particularly fancied by all accounts when coming in from 25/1 into 8/1. He ended up finishing seventh, but the form of that race was strong with the likes of New Kingdom, Waanees, Oh Herberts Reign, Dubai Poet all going on to win since. His second run was a little confusing though as he was once again well backed again in the morning but drifted like a barge at the off when other forces may have been at play when fourth with the form not as good as his debut subsequently. Was backed again on his last start again at Kempton when second to Kiwano who hasn’t really done much in Meydan since but the third has won since so it has a strong look to it. I asked the owner (Chris Kiely) on Twitter how he was, and he responded: ‘ He’s well he’ll win the Britannia next year’ so maybe his last two runs were for handicap purposes. If that is the way they are thinking, let’s hope for a high draw for him at Ascot!” OJ

“This was the horse that was third on Brayden Star’s last run at Kempton and he kept on well that day and his jockey Jim Crowley said afterwards that he was denied a clear run. He then went back to Kempton in early October when he comfortably disposed of the odds on favourite Millennial Moon who may not be the most straightforward. But what I liked about Bayraq was when he was challenged by Millennial Moon, he really stuck his neck out and went away again which is something I always like especially in young horses. He’s by Kitten’s Joy so he may prefer being on the all-weather but that didn’t stop his best son Roaring Lion. Bayraq was bought for $120,000 by Shadwell and is also out of Juddmonte Mare Fly Past and is likely to get a mile and a quarter in time.”OJ

“This beautifully bred son of Kingman is a half-brother to the stable’s former Group 1 winner Quadrilateral. Thesis made his debut at Sandown and was well backed throughout the day and ended up going off the 3/1 second favourite behind Dukedom. Looking back at the race it seemed as if Thesis’s jockey Richard Kingscote was simply riding to beat Dukedom, but when that horse capitulated and was left in front just over a furlong out. However, his immaturity and the fact it was his first run saw him not able to kick on again and he finished a nice third. Thesis hasn’t been out since and I have found out that he actually seized up after that run and was put on box rest for a while and only started cantering again in late September. But the form of that race is strong as we’ll get onto with even the sixth winning yesterday. He could even be one for the London Gold Cup Handicap at Newbury a race that his trainer Roger Charlton has a phenomenal record in.”OJ

“This colt by Cable Bay is a lovely big good-looking sort for a two-year-old and he could grow into his frame even more as a three year old. He was indeed second at Sandown when just getting the better of Thesis for that position when staying on up the Sandown hill. He then went to Sandown again on good to soft ground and finished second but talking to Karl Burke afterwards he regretted running him and he also said: ‘the winner is a bit of a monster’. We’ll talk about that ‘monster’ later. But Karl also said that he’d be a good handicapper next year. But he got off the mark at Musselburgh in a maiden on his next time and despite having to be shaken up he was always doing enough. He then ran in two nurseries after that in which I was on him on both occasions (thankfully E/W) as he was third on both occasions. He then was outclassed in the Group 1 Vertem Futurity. But look out for him mainly in handicaps this season. He’s been given a mark of 83.”OJ

“Now this horse is the ‘monster’ of a horse of which Karl Burke was referring too. This lovely looking son of Frankel won going away from the aforementioned Bullet Force in good style, which even managed to get his trainer Ralph Beckett to break cover and admit to the regard he held him in. Then he too went for the Haynes Hanson & Clark at Newbury, but he pulled too hard and could never reel in Zechariah. However, all was not lost and despite reports of him working well prior to that run the Beckett camp felt that that race would do wonders for the horse’s development. Ryan Moore took over in the saddle for Westover’s run in Listed company at Pontefract, and after being well backed into odds on favourite he was narrowly denied by Mr Professor. You could well argue that was more disappointing than his defeat in lower grade at Newbury as he had a lot in his favour that day. However, I’m not sure that Pontefract truly paid to Westover’s strengths and back on a more conventional track I think he could get back to winning ways in the early part of the season.”OJ