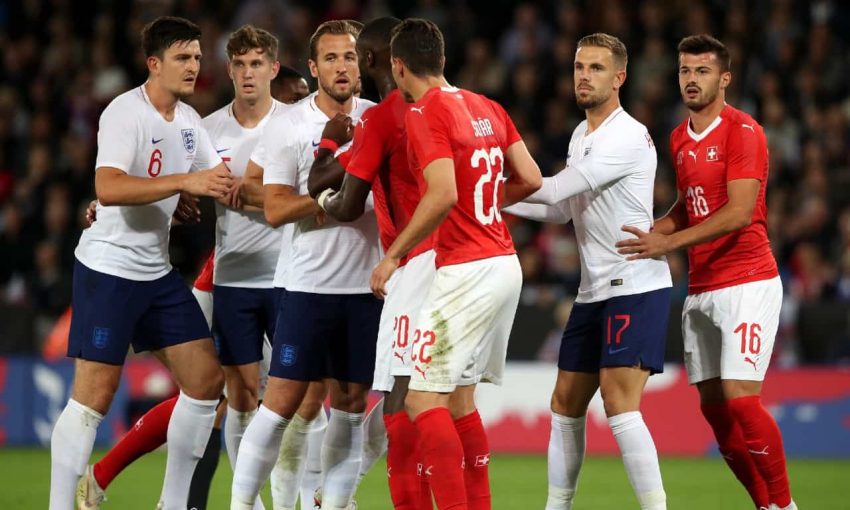 Preview and odds for Saturday’s friendly

Gareth Southgate begins building towards the Qatar World Cup later this year with a friendly against the 14th team in the FIFA rankings as we pick out some England v Switzerland betting tips.

Both sides topped their qualification group to secure safe passage to the middle east and with England themselves fifth in FIFA’s listings, this could be a good test for the young Three Lions, with the visitors unbeaten (in 90 minutes) in 10.

England are 4/5 to extend a 14-game unbeaten (in 90 minutes) run on home soil, while the visitors shouldn’t be underestimated at 19/5 in England v Switzerland betting tips. The draw is priced up at 12/5.

Saturday’s game at Wembley kicks off at 5.30pm and is live on ITV1.

Is it coming home?

A semi-final in 2018, a heart-breaking defeat in the rearranged Euro 2020 final. Is this finally the year that England exorcise the ghosts of 1966 and Southgate makes it third-time lucky at a major championship?

This game with Switzerland and next week’s friendly with the Ivory Coast are the Three Lions’ last games before their pathway to the final in Doha will be known and the England manager will be desperate to learn plenty about the state of his squad against meaningful opposition having faced the likes of Albania and San Marino in their most recent outings.

England have scored at least five in three of their last four fixtures and can be backed at 33/1 to notch up over 4.5 against the Swiss. That may be unlikely considering the visitors have conceded more than two only twice in their last 20 games.

France and Italy are the two sides that managed that during Euro 2020, but England are more than capable of matching that and England to score two or more appeals at evens in England v Switzerland betting tips.

Harry Kane hasn’t had his finest year in a Tottenham shirt, but he hasn’t stopped scoring for the Three Lions. He scored back-to-back first-half hat-tricks against Albania and San Marino to end Group I with 12 goals from eight games.

The captain looks a good bet to break the deadlock at 14/5 in England v Switzerland betting tips, while a goal at any point is 6/5. For a historic third consecutive England hat-trick you can get 33/1. Nothing neutral about the Swiss

Having denied Italy automatic qualification by toping Group C it is foolish to overlook the visitors, who let’s also not forget were only eliminated from Euro 2020 on penalties in the last eight.

They took part in one of the games of the tournament in the last 16 when overcoming France on penalties and they have given some of Europe’s elite plenty to think about in the past 12 months.

They will be looking to claim another scalp at Wembley on Saturday evening, before attempting to build on their major championship record with a bold bid in Qatar for which they are outsiders for the World Cup at 50/1.

Since elimination from Euro 2020, they have won four of their last seven, keeping five clean sheets in the process. It is 16/5 for them to keep it tight once again in England v Switzerland betting tips, while a win to nil at Wembley would be a real statement of their intentions and is available at 13/2.

The visitors have scored four in two of their last three and Breel-Donald Embolo may be their best chance of troubling the England goal. He scored two in the win over Lithuania in October and is 33/1 to hit another brace, while it is 7/2 for him to find the net at any time. There have been 14 meetings between these two since 1954 and it is England who have been the dominant force winning nine times, with the visitors coming out on top just the once and never at Wembley.

The last clash finished 0-0 in the third-place play-off of the inaugural UEFA Nations League in 2019 and a repeat of that scoreline is 7/1, while before that England won three consecutive head-to-head fixtures to nil against Switzerland and that can be backed at 33/20.

Two of those three came by a 2-0 scoreline and that is 13/2 in England v Switzerland betting tips, while recent trends would suggest England to win either half, score over 1.5 goals and also keep a clean sheet at 7/2 could pay dividend.

Switzerland have drawn a blank in their last four outings against England and it is 11/10 for that trend to continue, while this one could be cagey and under 2.5 goals can be backed at 8/13 in England v Switzerland betting tips.