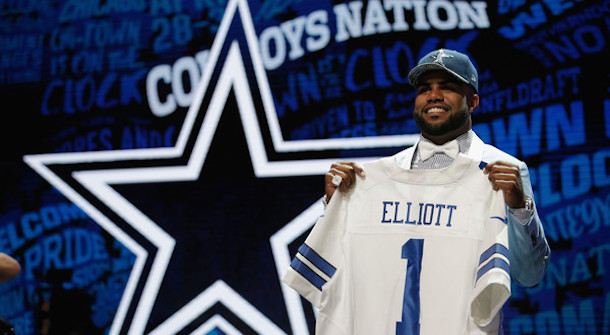 Dallas Cowboys running back Ezekiel Elliott isn’t technically in a contract year. But with his financial situation about to change, this is a must season.

Ezekiel Elliott is fighting for his future.

The Dallas Cowboys are trying to defend their NFC East title while eventually looking to make a deep playoff push. Their star running back is a big part of those plans. Yet for Elliott, he also realizes a big statistical year not only means big things for the Cowboys, but also stability in his future.

After signing a six-year, $90 million extension midway through his rookie deal, the three-time Pro Bowler is about to become a much more affordable commodity to release if Dallas isn’t happy with his performance.

As Todd Archer of ESPN outlines, Elliott’s guaranteed money will be paid by season’s end, and thus Dallas could save a considerable chunk by cutting bait and giving Tony Pollard more carries.

And, in recent years, Elliott hasn’t been the player he once was.

A first-round pick in 2016, Elliott led the league in rushing as a rookie and again in 2018. The following year, Elliott rushed for 1,357 yards and 12 touchdowns, earning his final Pro Bowl trip to date. In ’20, the former Ohio State star only notched 979 yards and six scores on the ground, before a respectable 1,002 rushing yards and 10 touchdowns on 4.2 yards per carry last season.

Still, those numbers might not be enough to keep Elliott around moving forward.

For his part, Elliott is aware of the situation, something he talked about on Wednesday, per ESPN:

If the Cowboys win the division and play a few playoff games, Elliott is likely to stick provided he produces. But if Dallas struggles and Elliott isn’t back in Pro Bowl form, this could be the breaking point for a player who once was the most recognizable face on the team.