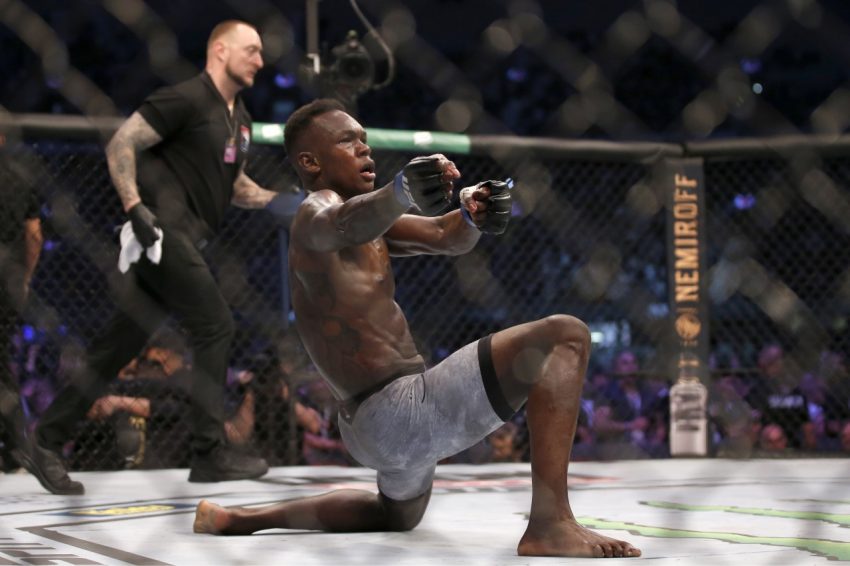 Topping the bill is Israel Adesanya as he defends his Middleweight crown against #2 ranked Jared Cannonier.

But that’s not all – we have a second title bout in the shape of a trilogy fight, where Max Holloway gets his third crack at Alexander Volkanovski for the Featherweight belt.

Add in some rising stars and other, on paper, entertaining fights and you have one hell of a night to look forward to.

Let’s take a look at the main card…

Since his ill-fated tilt at the Light-Heavyweight title against Jan Błachowicz back in March of last year, Israel Adesanya has won two on the bounce back at Middleweight.

Marvin Vettori and Robert Whittaker were comfortably dispatched via unanimous decision to continue Izzy’s dominance at 185lbs and next in line is Jared Connonier, who after wins over Kelvin Gastelum and Derek Brunson has pushed himself in to prime position for a shot at the big one.

Cannonier is tough and has resilience by the bucketload, but it’s extremely hard to look past Adesanya in what should be another striking clinic from the New Zealander.

There’s not much value to be found in a straight-up win for ‘The Last Stylebender’ at 2/9, so turn your attention to Izzy by Ko, Tko Or Disqualification at 13/8 – or on Points at 5/4.

The former will return you more but the latter is more likely, with the champion having finished just three of his last 10 fights, preferring to play with and pick apart his prey.

After his destruction of ‘The Korean Zombie’ at UFC 273, Alexander Volkanvoski has risen in the pound-for-pound rankings from #3 to #2, sitting only behind Welterweight champion Kamaru Usman, and frankly, it’s more than deserved.

The Aussie has been on a tear ever since joining the UFC, now boasting on 11-straight victories in the octagon at 145lbs. In the opposite corner is an old foe in Max Holloway, who he’s already beaten twice.

But stating it as such doesn’t tell the full story, as both fights were nip and tuck and the self-proclaimed ‘best boxer in the UFC’ will once again be a very live dog in this one.

The Hawaiian’s incredible volume of strikes will once again be crucial to any victory, but Volkanovski always has his superior grappling in his back pocket to offset any advantage ‘Blessed’ has with the hands.

It will no doubt be an entertaining fight, but all logic says Alexander ‘The Great’ will come away with a very tight Points victory once again at 11/10.

Before our two title fights we have something very interesting in prospect, as Top-Five Middleweight Sean Strickland looks to continue the momentum he’s gathered since moving back up to Middleweight.

This one could very well determine the next challenger for the winner of our main event, with Strickland’s five-fight winning streak meaning he’s in prime position for a shot at the belt should he pick up the victory.

Alex Pereira meanwhile is on a meteoric rise, and it looks as though he’s being fast-tracked to a title shot having only fought twice in the UFC.

The former kickboxer is just five fights into his MMA career and he holds two victories in his former pursuit over, yes, you guessed it, Israel Adesanya, making a potential title fight between the two a very interesting prospect indeed.

For Strickland, this could be considered a trial run for a fight against Izzy, as while they’re not replicas, the Kiwi and Pereira’s style are close enough to figure some things out.

Strickland’s boxing is good, he also has some slightly underrated grappling, which may be something he could look to employ here. If they stand and trade, this one is a toss up as the odds indicate. It all depends on the meshing of styles.

We’re going to go somewhat out on a limb and pick Pereira to win by Ko, Tko Or Disqualification at 13/8.

Despite having never been truly tested at the highest level in the UFC, ‘Sugar’ Sean O’Malley has cultivated the attention and fanbase of some of the organisation’s biggest names.

It’s this fight on Saturday night that could finally propel him into the top 10 at Bantamweight and put him on the path to an eventual title shot.

At 35, Pedro Munoz is no spring chicken and has slipped into somewhat of a ‘gatekeeper’ role in recent times. A victory over O’Malley could definitely change his trajectory in a significant way, while a setback here could spell the end of any future charges toward the title picture.

Stylistically this is a tough matchup for the Brazilian given that O’Malley will look to slip and slide, and crack him with counters.

Lucky for him he has a durable chin, which will be all-important in being able to keep on the pressure while getting tagged.

With that said, we can’t look past the young star in this one. We think Sugar Sean will open the main card with a finish via Ko, Tko Or Disqualification at 6/4.