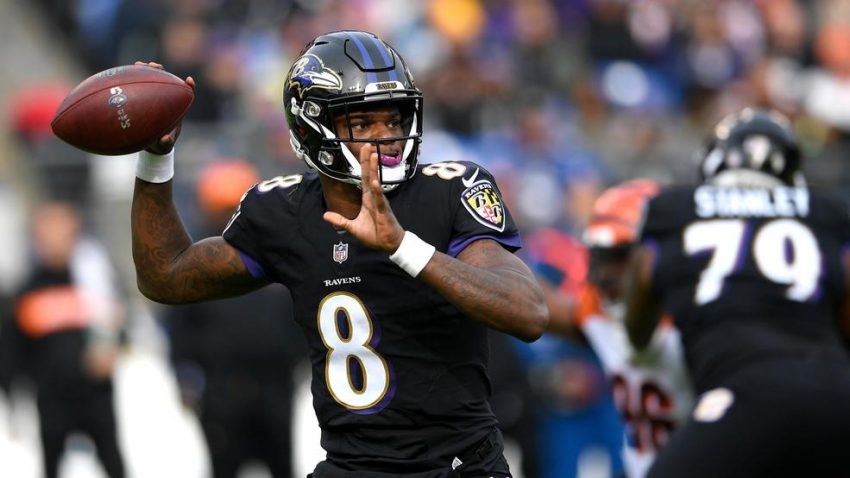 Baltimore Ravens quarterback Lamar Jackson has returned for the offseason in great shape, according to head coach John Harbaugh.

Lamar Jackson has added mass since the season ended 5 months ago, weighing in at 220 pounds. That’s a 15 pound increase from last year.

“As far as the throwing, catching and targeting and playmaking stuff, I was happy to see that,” John Harbaugh said. ‘I was wondering about it, how was it going to look. To see it look that good and see the shape he was in and how well he threw the ball, for a coach, that’s exciting.”

This will be good news for Ravens fans, who have been bombarded by speculation about his contract situation.

Lamar Jackson isn’t giving anything away with regards to his potential new deal. This was exacerbated by the fact he skipped three weeks of voluntary OTAs.

Jackson has consistently said he and the organization are having a ‘conversation’. However, he’s more focussed on the football side of things.

“We’re going to work, watch some film and just build our chemistry some more,” Jackson said.

He doesn’t appear to be agitating for more money, either. It was speculated that Deshaun Watson’s contract was an influential factor.

Watson’s Browns contract is for five years with $230 million guaranteed, which is $80 million more than any NFL player has ever received.

As well as that, he was positive when asked if he would play for the Baltimore Ravens for his entire career.