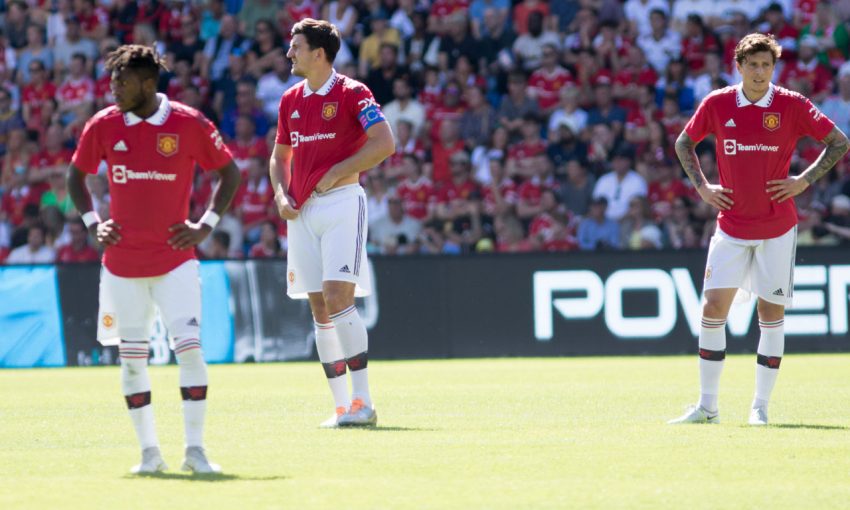 Erik ten Hag takes charge of his first game in English football and we have analysed the odds to pick out some Man Utd v Brighton betting tips.

Preparations for the new season have been far from ideal for the new United manager but the Dutchman is odds-on to make a winning start in the Premier League.

Sunday’s match at Old Trafford kicks off at 2pm and is live on Sky Sports.

Ten Hag will be desperate to make a good first impression on the Old Trafford faithful and will hope the fans stay longer than Cristiano Ronaldo and other players did for Sunday’s friendly against Rayo Vallecano.

The former Ajax boss has admitted pictures of Ronaldo and Diogo Dalot leaving the game before full-time were “unacceptable” and the Portuguese star seems unlikely to be fit enough to start on Sunday.

Leaving Ronaldo out of the team could be the best way to get United playing the kind of football Ten Hag is hoping for as they seek at least a top-four finish and they managed perfectly well without him in last month’s 4-0 friendly victory over rivals Liverpool in Thailand.

The ongoing pursuit of Frenkie de Jong seems no nearer to ending either so Ten Hag has plenty of problems to contend with and creativity in midfield could be one of them, while up front Anthony Martial is set to miss out with a hamstring injury.

It is only three months since United were thrashed 4-0 at Brighton so odds of 8/13 for a home win look too short.

Instead we prefer backing the visitors with a one-goal start on the handicap at 27/20 in the Man Utd v Brighton odds.

Brighton only finished three places and seven points below United in the Premier League table last season so will head north hopeful of causing an upset.

Another top-10 finish will be the aim this season but, in truth, staying well clear of relegation danger would be a success given the resources available at other mid-table clubs.

The key to any hope of improvement will be their home form, which was disappointing last season, but that was certainly not the case on the road.

Albion had the best away record of any team outside the top four and only Manchester City, Liverpool and Chelsea suffered fewer defeats on their travels.

The departure of Yves Bissouma is a big blow and could mean Brighton’s defence is more easily exposed.

It is unclear whether United have the midfield quality to do so consistently on Sunday though so under 2.5 looks the pick in the goals market at 5/6.

Trossard the man for the big occasion

We’re focusing on the goalscorer betting for the last of our Man Utd v Brighton predictions and given our concerns over United’s preparations, there may be value to be found in backing a Seagulls player to strike first.

Neal Maupay and Leandro Trossard were Brighton’s joint-top scorers last season with eight goals apiece and the latter was particularly impressive against the big clubs.

Five of his eight goals were scored in away games including at Liverpool, Arsenal and Tottenham, with the latter two having been the first goal of the match.

Having also scored against United in May plus a hat-trick against Espanyol in a recent pre-season friendly, Trossard to score first at 10/1 catches the eye.