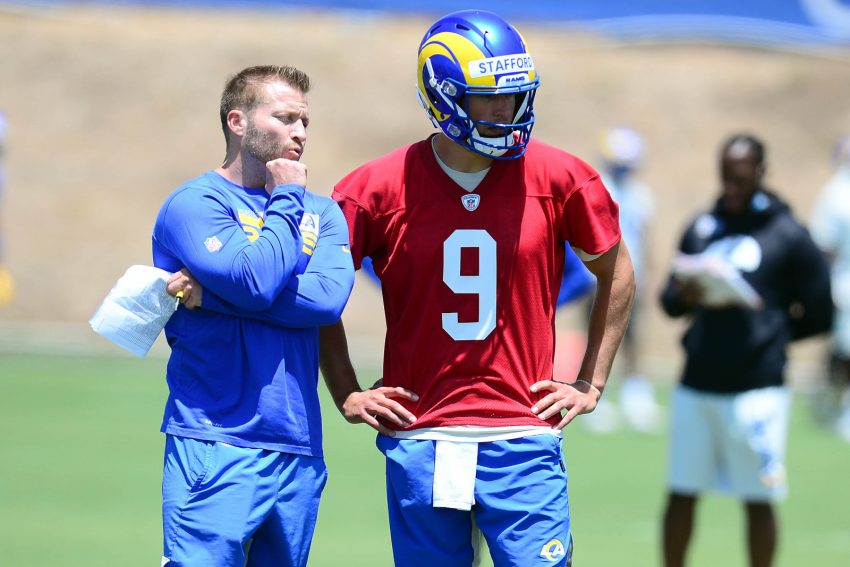 Fresh off of a season of vindication and Super Bowl success with the Rams, Matthew Stafford is looking forward to what he can accomplish in the future.

The quarterback recently signed a four year, $160 million extension to remain in Los Angeles. After 12 difficult years with Detroit, Matthew Stafford is relishing the prospect of having Super Bowl caliber players around him.

One addition that could prove fruitful is the signing of free agent Allen Robinson II from the Chicago Bears. He joins a WR room that includes Van Jefferson and Cooper Kupp.

“Some of the areas that becomes such an advantage is probably down in the red zone,” Matthew Stafford said.

“There’s just less field for defenders to defend. Therefore, it’s a little bit easier to cover guys. His ability to go up and make catches over guys, around guys, whatever it is, is really special. I’ve seen it up close and personal.

“At the same time, for a guy of his size, I think he does a great job of separating, too. There are quite a few times where he’s doing a great job whether it’s at the line of scrimmage or whether it’s at the top of his route transitioning and doing a great job of creating space for the quarterback as well. I think you get the best of both worlds when it comes to that with him. I’m eager to get out there and get to work with him and see what it’s like throwing to him.”

Read: Buccaneers Have Clear Path In NFC South This Year

Robinson echoes Stafford’s eagerness to combine and can’t wait to develop and on-field relationship with him.

“Just kind of watching Matt’s career from afar, seeing all of the receivers he’s played with and being able to see everything he’s been able to help his receivers accomplish … being able to kind of step into that and being able to build that rapport and that relationship, that’s what I’m looking forward to,” he said.