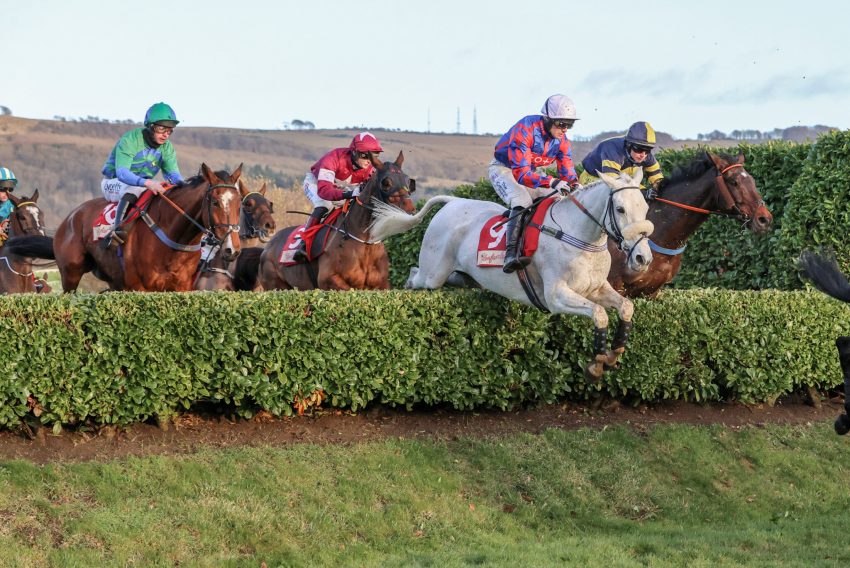 Day two of the Cheltenham Festival and it’s the rematch that takes centre stage. Shishkin and Energumene will be renewing their rivalry from the Clarence House epic in the feature Queen Mother Champion Chase.

Some rain is forecast but it shouldn’t make too much difference to ground conditions.

An absolute conundrum. There is no doubt that Sir Gerhard looks the best horse in the race on evidence to date and won the Champion Bumper at last year’s meeting.

However, it was a close call between this and the Supreme, and Jamie Codd, who rode him in bumpers suggested he is all speed. Although his suspect jumping shouldn’t be tested as much going a yard slower and he could be the new Faugheen.

However, at odds on I think he must be taken on but the issue is finding a solid alternative.

Journey With Me is unbeaten but going into the festival his stables form is a concern while Stage Star is yet to taste defeat in three hurdles starts but the form doesn’t amount to much and his bumper form is also similarly starting look less watertight.

I suggest a small each way play on THREE STRIPE LIFE who is entitled to finish within hailing distance of Sir Gerhard on their two meetings so far and will appreciate the extra distance as he is related to some strong stayers.

Sir Gerhard’s stablemate, Whatdeawant went off just 2/1 to beat Albert Bartlett favourite Ginto in January and although was well held, is clearly regarded and has been nibbled for this contest in recent days. Don’t discount him.

BRAVEMANSGAME has been compared to Denman for most of his career and while doing nothing to disprove that over fences so far, he can go to the next level and emulate his stables former great with victory in the staying novice chase.

His debut win at Newton Abbot, a track that would be sharp enough, raised a lot of eyebrows as he gave a comfortable beating to subsequent Charlie Hall winner Fusil Raffles, before slamming the frustrating Itchy Feet at Haydock and griding down the reopposing Ahoy Senor at Kempton.

He then gave over a stone away when accounting for talented novices at Newbury and he really looks a star in the making. A 47th Festival winner for Paul Nicholls awaits.

The aforementioned Ahoy Senor will appreciate this track more than Kempton, but his jumping remains suspect while the impressive L’Homme presse is a horse I like but needs to prove himself at the trip and the stable have had a few horses with a bug in recent weeks, so that too is a concern.

The selections stablemate Threeunderthrufive can outrun his price but the main danger looks to be Willie Mullins’ Capodanno. He unseated at the Dublin Racing Festival which is a worry, but he was impressive on chasing debut despite a bad blunder two out and gave Bob Ollinger a fright at Punchestown on second start. The step up in trip will suit and he can chase home BRAVEMANSGAME. The annual cavalry charge that is the Coral Cup and with as many as seven places up for grabs on each way bets in some quarters, a couple of darts must be fired.

Nicky Henderson has won three of the last eight running’s and he solely relies on Call Me Lord – who wouldn’t be without a chance on his fast-finishing third in the Lanzarote Hurdle off 2lb higher – and can be forgiven a tough ask over three miles at Sandown five weeks ago.

Good Risk At All has been the long time favourite for this race but didn’t make the final cut, having to settle as the first reserve and failing to get a run.

There are lots of chances, as a 26 runner handicap hurdle should have with JP McManus mob-handed with four runners, including last years Plate winner The Shunter. Drop The Anchor ran like he had a plan at Leopardstown and he could be the best of the foursome with the excellent Simon Torrens claiming 3lb.

Saint Felicien will attract plenty of support as a very lightly raced Gordon Elliot contender. He was sent off odds on to beat the consistent Darasso in January, but experience is a concern in such a big field on his fourth start and his rating of 149 doesn’t look a gimme.

Two against the field then. First up is GOWEL ROAD for team Twiston-Davies. He was well held in the County last year as a novice, but he had some good form heading into the festival. He is lightly raced this year for one from this yard, so it looks like it has been the plan all along. He beat Unexpected Party over track and trip in November and is 11lb better off with him now due to that’s one subsequent exploits.

GOWEL ROAD wasn’t beaten far in either the Gerry Fielden or at the Winter Million meeting at Lingfield and is lightly enough raced to be a threat off a 4lb higher mark than his latest effort.

Second dart goes to lightly raced novice INDIGO BREEZE for Gordon Elliott and the excellent 3lb claimer Jordan Gainford. Big fields haven’t bothered him in maiden company, and he was a fair second to Autumn Evening when last seen. That one finished a fine third at the Dublin Racing Festival and although letting the form down at Kelso, he was sent off just 5/1 off a mark 7lb higher than INDIGO BREEZE carries here.

Christopher Wood has never been at his best on undulating tracks but travelled well when having no answers to Good Risk At All at Ascot and while an 8lb turnaround wouldn’t be enough to reverse the form, he could run into a place at a huge price. Garry Clermont has been very consistent all season and is entitled to finish close to Unexpected Party despite being three times his price. Here it is. the rematch.

Shishkin got the job done at Ascot despite a notable mistake and jumping to his left at times but quickened up well on the run-in. ENERGUMENE seemed to have the run of the race. So, with Shishkin already winning both his festival races to date, will it be a penalty kick to make it 2-0, right and go 8/8 over fences?

Well, that maybe the case but there are grounds for giving ENERGUMENE the chance to gain revenge and the price disparity looks too big, especially now that Editeur Du Gite goes for the Grand Annual. That means there is less pace opposition with only former champion Politilogue a regular front runner. It was the 8yo’s first taste of defeat over obstacles at Ascot, but he is lightly raced after just nine starts and at around 7/2, I think he is far too big.

Of the rest, Chacun Pour Soi has disappointed twice when travelling over to Britain and reigning champion Put The Kettle On hasn’t been in any kind of form in two starts this year.

If there was one to upset the top two, it maybe last year’s runner-up Nube Negra who will be hoping the rain misses the track. His Cheltenham form reads 23821 including a romp in the Shloer Chase over track and trip in November and could be the each way player at around 10/1.

We bid farewell to one of the greats in the Cross Country as its widely expected Tiger Roll will run his final race of an incredible career.

A Triumph Hurdle, National Hunt Chase and three successes over this course alongside a brace of Grand National victories and almost £1.5m in prize money, marks the 12yo out as an extraordinary equine athlete who will bring the curtain down after his 45th race.

The fans, marketeers and headline writers will be desperate for the fairytale ending, but this is no place for sentiment. He is far too short from a punting perspective as he heads towards teenage status despite his insistence on defying stats and logic almost all his racing life.

The 2020 winner Easysland perked up on a recent schooling trip to the course for Jonjo O’Neill and has to be respected. The new kid on the block is another ex-French runner in Prengarde, who has joined the ‘Banks King’ Enda Bolger but was well beat over hurdles recently and despite that clearly being a ‘prep run’ for this task, I would have liked to have seen a little more enthusiasm.

In a contest that doesn’t pump the blood from a punting perspective and maybe best watched for sentimental reasons, a small each way play on DIESEL D’ALLIER maybe the way to go. He has plenty of cross-country experience from his native France and has finished 1431 in his four attempts here at Cheltenham, the most recent pair of efforts since joining the Hampshire yard of Richard J Bandey.

At around 16/1, he can be expected to run his usual solid race and hopefully hit the frame at least.

With the likes of Editeur Du Gite, For Pleasure and Global Citizen lining up in this year’s Grand annual, a ferocious pace is assured and although it usually aids front runners of late around this track, I must look for a horse who will be held up.

Sky Pirate won this contest narrowly last year but now must carry top weight form a 4lb higher mark after a consistent season that has seen him run well without entering the winners’ circle.

I will go for ANDY DUFRESNE here who will be making his handicap debut for Gordon Elliott and looks to be the choice of JP McManus’ jockey, Mark Walsh. He was tipped for the top over hurdles and has acquitted himself well in graded company over fences to date. He will likely travel strongly behind the decent pace and pounce late up the hill as he is a horse that will stay on strong.

I must also give a favourable mention to Frero Banbou who will be held up for Venetia Williams. He too has had a good season and is 4lb better off with Editeur De Gite than when six lengths behind him here in November.

Willie Mullins has won the Champion Bumper no less than ELEVEN times and saddles SEVEN runners in 2022 in his bid for a twelfth.

The talking horse amongst those is Facile Vega, son of six-time Cheltenham winner Quevega who has lit up the racecourse with two sensational successes to date by a combined eighteen lengths. He is very easy on the eye and looks set to high rank, but at around even money and with 21 other rivals, I will look elsewhere.

Stablemates Redemption Day and James’s Gate also impressed on their only starts to date but I think this may go to Gordon Elliott for the third time in six years courtesy of AMERICAN MIKE.

He too has made mincemeat of his rivals winning by seven and seventeen lengths respectively in his last two run-outs, his latest victim being beaten a nose in the Grade 2 Mares’ bumper at the Dublin Racing Festival.

That gives his form a little more substance than the favourites. Jockey Jamie Codd thinks he is up to the task of challenging Facile Vega and the handicapper has them on the same rating.

At a bigger price, the 4yo filly Rosy Redrum gets a 17lb weight allowance from the boys and should really have won at Newbury when beaten by Top Dog.

She was well behind turning for home but made good progress which just told in the closing stages. Her trainer Milton Harris thinks she would be at least listed class on the flat and in receipt of so much weight, maybe worth a small each way play at around 33/1 with firms who pay four places or more.