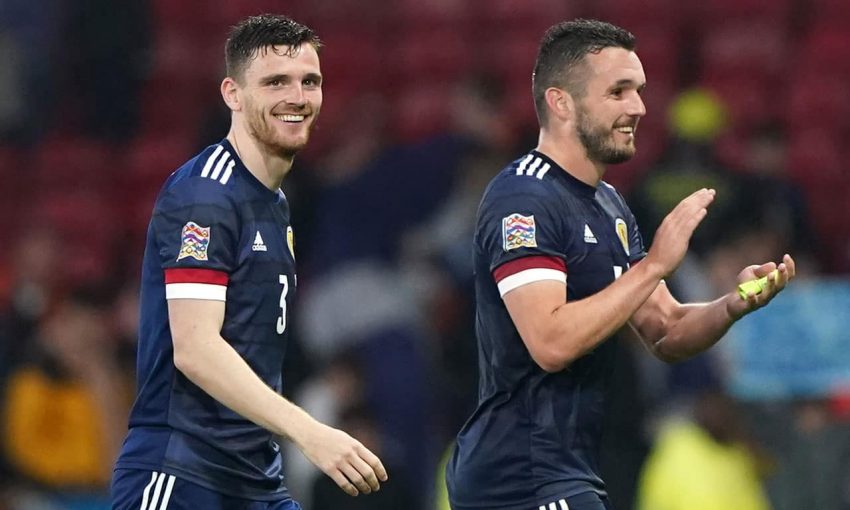 The Nations League games just keep on coming and we have picked out some Republic of Ireland v Scotland betting tips ahead of Saturday’s clash in Dublin.

Scotland sit top of League B, Group 1 on goal difference after kicking off their campaign with a win over Armenia, while Ireland prop up the section after two straight defeats.

Stephen Kenny’s men cannot afford another slip in this one, which kicks off at 5pm at the Aviva Stadium and will be shown live on Premier Sports.

Losing 1-0 to Ukraine on Wednesday night, after going down by the same slender margin in Armenia last weekend, stretched Ireland’s winless run in the Nations League to 12 matches.

They have also lost to Wales three times and Finland twice while managing draws against the Welsh, Bulgaria (twice) and Denmark (twice).

Joy for Ukraine but disaster for Ireland as they concede from a free kick within 2 minutes of the second half! 🤯

Scotland have a much healthier relationship with the Nations League with seven wins from 11 games. Two of their three defeats in the competition were the games immediately following the Euro 2020 play-off win in Serbia when they ended their long wait to reach a tournament. Big-match hangover? Possibly.

The Guinness will be flowing when the Tartan Army head across the water and it is 15/8 they will be celebrating at the final whistle. Ireland are 17/10 to nab a first win and the draw is 2/1.

No time to dwell

Kenny has told his players to put the defeats of the past week behind them, and quickly.

The Irish boss said: “We’re hurting at the moment and we don’t have time for that because such is the quick turn-around here. We’ve got to get ourselves ready for Scotland.

“I’m just raging that we didn’t get at least one win there in the two narrow games.”

Scotland manager Steve Clarke was much happier after the win over Armenia, saying: “The way we approached the game, the speed of the ball, we took up the right positions against a very defensive team.

“We knew we had to work hard to break them down and that’s what we did. We kept trying the right things at the right times and eventually we got the goals.”

Making a case for the defence

It was two defenders on target for Scotland with the goals coming from Celtic right-back Anthony Ralston, making his international debut, and Nottingham Forest’s Scott McKenna.

The World Cup play-off defeat by Ukraine aside, Scotland had been on a decent run of results but they have gone four games without any of their strikers scoring.

If McKenna gets the nod to start in Dublin he is worth including in Republic of Ireland v Scotland betting tips.

The former Aberdeen man can be a menace in the opposition box and had the ball in the net a second time on Wednesday after straying just offside. He is 40/1 for the first goal and 20/1 at any time.

🏴󠁧󠁢󠁳󠁣󠁴󠁿 Scotland got their #UEFANationsLeague campaign off to a 2-0 win over Armenia last night.

Shane Duffy had Ireland’s best chance against Ukraine when his header crashed off the crossbar and the Brighton man is 18/1 to break the deadlock or 17/2 just to score.

There’s not much to go on in terms of a recent head-to-head record – they have played each other five times this century and three of those were friendlies.

In the qualifying campaign for Euro 2016, Scotland’s Shaun Maloney curled home the only goal at Celtic Park then the points were shared when the teams met in Dublin.

Germany and Poland took the two automatic spots for France as Scotland finished fourth and waved third-placed Ireland off to the play-offs and on to the tournament where, to be fair, they did just fine, reaching the knockout stages and bowing out to eventual runners-up France.

That must seem like a lifetime ago to fans of the Boys in Green. That was their last taste of tournament football and they have slipped down the FIFA rankings since, passing the Scots on the way. Clarke and Co are 39th while Kenny’s men occupy 47th.

Clarke made six changes to his side after losing to Ukraine and fit-again Nathan Patterson returned as a late substitute at right-back but it would be harsh on Ralston is he was squeezed out after that impressive debut.

Ireland defender John Egan limped off after an hour against Ukraine and may have to sit out against the Scots.