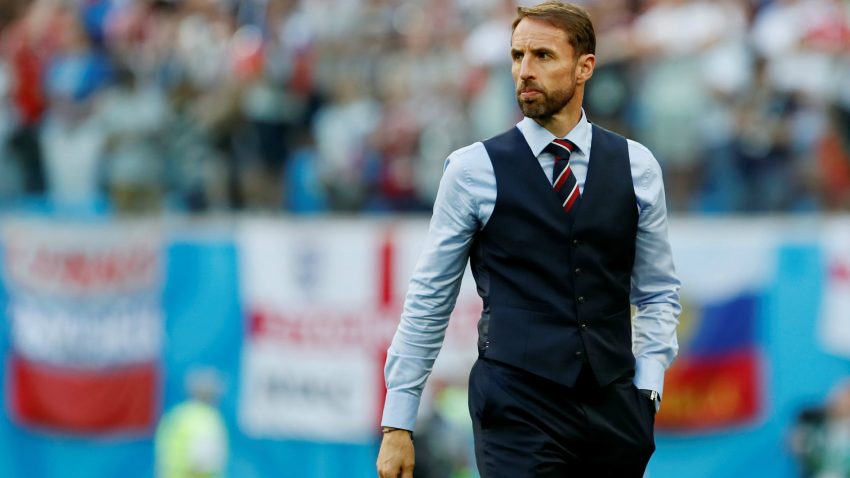 If there’s one thing Saturday’s 1-0 defeat to Hungary at the Puskas Arena showed Gareth Southgate, it’s that England (Match Winner – 12/5 v Germany) must play their own game.

Any England fan reading the above sentence, in the light of witnessing the weekend’s 3-4-3 set up aimed to ‘match up’ Hungary, would be well within their rights to ask ‘but what is our game?’.

To explore that question, we must first take a brief trip back through time.

England’s progression under Southgate has been a steady one. Hark back to his first tournament in charge, the 2018 World Cup, and we see promise, yet trepidation, as the manager was yet to find the formula, instead opting for a pragmatic five-at-the-back system.

It served us well, of course, leading us to the country’s first semi-final appearance in a major international tournament since the 1996 European Championships.

🗣 | “We are very happy that you have Gareth Southgate!”

😬 | @Sky_Uli believes Gareth Southgate is too cautious and is backing Germany to pick up all three points in Munich tomorrow.

But there was no clear identity, it was almost a marriage of convenience based on personnel, the debate was almost not what we should play, but what we could.

‘These centre-backs, in a two?’ would be regularly heard among the chatter of England fans and pundits alike.

Then came the 2020 Euros, played in the summer of 2021, where such systems were cast aside in favour of a four-man defence. At last, we had reached the promised land of a progressive mindset and forward-thinking football.

Well, not quite. Southgate’s chosen tool of pragmatism then became the double pivot of Declan Rice and Kalvin Phillips, an aggressive, tireless duo both tasked with shielding the soft underbelly at the centre of England’s back line.

But that’s the thing about evolution, it doesn’t happen overnight. It’s a slow, enduring process that adapts to its surroundings.

At the time, Jude Bellingham perhaps wasn’t ready to operate in that double-pivot without severely compromising the teams’ defensive solidity.

🗣 | “I don’t think the system worked. I don’t know if it was the personnel that was wrong, but it didn’t really work.”

📋 | What changes, if any, would you make to the starting XI vs. Germany? #ThreeLions pic.twitter.com/qD6olMExB2

But if there’s one thing football fans with a keen eye on events in mainland Europe know, it’s that Bellingham is more than ready, and the potential of what he can offer in terms of the fluidity of the team far outweighs that of anything going the other way.

Swap one of those centre-backs for a Mason Mount in front of Bellingham and Rice, throw in a winger of your choice to replace the Chelsea man out wide, pull our full-backs back alongside the two centre-backs, and there we have an England team that can begin to cultivate a culture on the pitch that can rival the clearly ever-positive one off it.

Yes, yes, we have the never-ending ‘problem’ of trying to fit in our myriad of quality right-backs, but it’s not worth sacrificing team cohesiveness, as much as we all rate Trent Alexander-Arnold.

We have to mention, England found success in last summer’s European Championships by matching Germany’s then 3-5-2 formation, but at least in the last couple of games, Germany manager Hansi Flick has steered them away from that and opted for a 4-2-3-1.

It goes without saying, going toe-to-toe with Germany without some sort of security blanket could end badly, but it’s a test these players must, if not pass, at least experience and learn from.

The clock is ticking on the Qatar World Cup (England 11/2 Outright Winners). We have the players, now is the time to trust them.