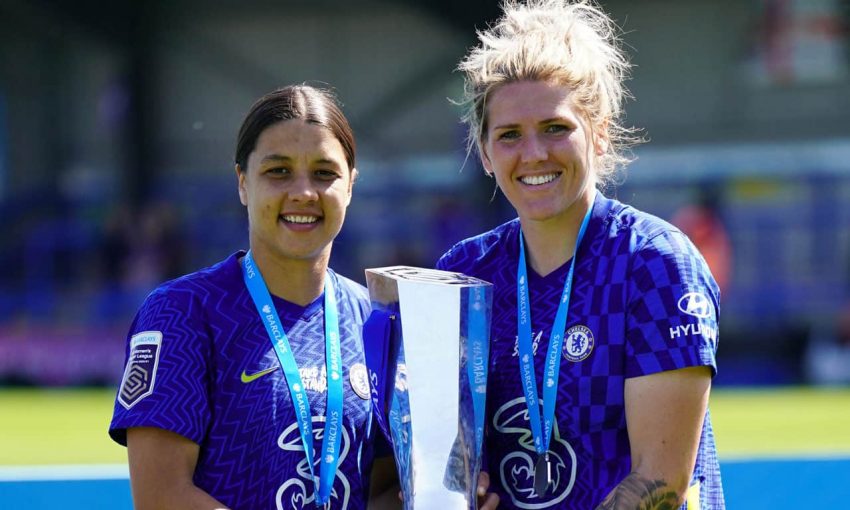 The Women’s Super League season drew to a close on Sunday when Chelsea claimed a third successive title.

The Blues came from behind twice to beat Manchester United 4-2 and hold off the challenge of Arsenal, who finished one point adrift after beating West Ham 2-0.

Here we take a look at some of this season’s stand-out players in the Women’s Super League.

Earps has had a stellar season between the sticks for United. The side were pushing for a Champions League spot right up until the last match and Earps helped their goal difference by keeping 10 clean sheets.

Originally a full-back, Greenwood has slotted in at centre-back this season for City. With captain Steph Houghton out injured for the majority of the campaign, Greenwood has stepped up to the plate at the heart of the defence and has been an ever-reliable presence for Gareth Taylor’s side.

Bright has flourished in the Chelsea backline and is a key cog in Emma Hayes’ machine as the Blues claimed another WSL title. The England defender started in every Chelsea game this season, putting in assured and calm performances at the back.

One of the most versatile players in the Women’s Super League, McCabe has played in nearly every outfield position on the pitch this season. Able to operate at full-back, down the wing or up front, the Republic of Ireland captain works well in Arsenal’s build-up play and has provided plenty of assists this season. Neville has been an important player in the Spurs defence and has made contributions at either end of the pitch this season. The full-back is known for her tough tackling but has also featured further up the field, scoring three league goals including the winner against Leicester on Sunday.

Despite a tricky start to the season for City, Hemp has been an incredibly consistent performer for her team. Working down the wing, she has become a key part of City’s attack both as a goal scorer and provider. Her efforts saw her notch 10 goals and six assists this term.

Still only 22, Toone is one of the most exciting young prospects in the Women’s Super League. The midfielder has built on an impressive season last year with United and has continued to progress this campaign as one of the leading assist providers, as well as scoring seven goals so far. This season also saw her become the first female player to reach 100 club appearances for United.

The England international has been a crucial source of creativity for the Gunners on the wing. Mead finished joint-top of the assists table but also got herself on the scoresheet 11 this season, including a fantastic goal from distance in the 7-0 win against Aston Villa earlier this month.

After signing last summer, Khadija ‘Bunny’ Shaw has enjoyed a fine debut season for City. She scored on her first WSL appearance for the club in their 4-0 win over Everton in September and put four past Brighton last month. The 25-year-old Jamaica international was also on target in Sunday’s 4-0 win at Reading and will be eager to provide more of the same next season. The all-time WSL record goalscorer has had another solid season for Arsenal as they have gone head-to-head with defending champions Chelsea in the title race. The arrival of Sweden striker Stina Blackstenius in January saw Miedema drop into a number 10 role for some games, meaning she turned provider as well as continuing to challenge for the WSL Golden Boot with her clinical finishing.

Kerr has had another hugely impressive season for Chelsea and won this year’s Golden Boot with 20 goals – six more than her nearest rival Miedema. The prolific Australia forward has been invaluable as the Blues secured for a third consecutive Women’s Super League title, including scoring a last-minute winner against Aston Villa in March before bagging a brace on Sunday to help Chelsea claim the three points they needed to be crowned champions.