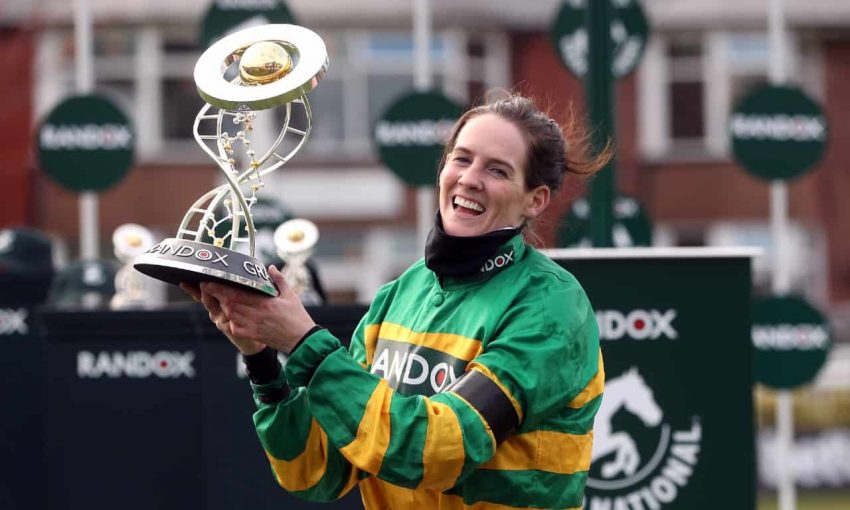 The history of women in the Grand National

In 2021 Rachael Blackmore made history, becoming the first female to win the Grand National when the superstar Gold Cup-winning jockey partnered Minella Times to victory in the 4m2f Aintree showpiece.

However, what about those who went before her? Here we look at how women in the Grand National have got on at Aintree over the years.

A total of 19 women have tackled the Grand National since females were first allowed to take part in the race in 1977.

Charlotte Brew was the first woman to ride in the National that very first year, although her horse failed to complete and the mantle of first woman to complete the course in the Grand National goes to Geraldine Rees, who finished eighth aboard Cheers in 1982.

No one else managed to complete the course until Rosemary Henderson finished fifth on Fiddlers Pike in 1994, while it was another 11 years before Carrie Ford guided Forest Gunner to the same finishing position in 2005.

Then came recent Dancing With The Stars winner Nina Carberry and her sister-in-law Katie Walsh who heralded a new era for female riders in the Grand National, both taking part in the Aintree highlight six times between 2006 and 2018. Carberry completed on four of her six spins around Aintree, including twice aboard the popular grey Character Building, while Walsh finished third on the 8/1 joint favourite Seabass in 2012 and that was the highest finishing position for women in the Grand National before Blackmore’s victory in 2021.

Three women have trained a winner of the Grand National and two within the last 15 years, but it is Jenny Pitman who first bucked the trend of male dominance with a pair of victories.

Pitman was one of the greatest handlers of her generation and the two-time Gold Cup-winning trainer first tasted Grand National success in 1983 with Corbierre before Royal Athlete made it a double for ‘Mrs P’ 12 years later in 1995.

Royal Athlete had previously been sent off favourite for the 1993 Grand National, but it was stablemate Esha Ness who crossed the line in first place. Unfortunately this was the year of the void Grand National and the victory would not go against Pitman’s name in the record books.

She also saddled Garrison Savannah to finish second in 1991 and saddled a Grand National runner every year from 1981 until her retirement in 1998. Finally, Sue Smith made it a hat-trick for women in the Grand National when Auroras Encore sauntered to success at 66/1 in 2013. Married to former international showjumper Harvey Smith, she is one of the most popular handlers on the northern jumps circuit.

We’ve heard about the women taking part, but what about the equine girls, the mares?

There have been 13 mares that have won the Grand National in the past, with Charity the first in 1841.

However, the last of the 13 to taste Aintree success was Nickle Coin in 1951 and since then no mares have crossed the line in front in Merseyside.

Eight mares have finished in the top four since Nickle Coin’s victory in 1951, with Magic Of Light the most recent to do so when finishing second to the mighty two-time winner Tiger Roll in 2019. Could 2022 be the year that changes? Well Snow Leopardess has already scored over the famous birch of the Grand National fences and the dazzling grey is 12/1 to follow up her Becher Chase success in the biggest race of all, while Mount Ida is a 20/1 shot for three-time Grand National-winning trainer Gordon Elliott.