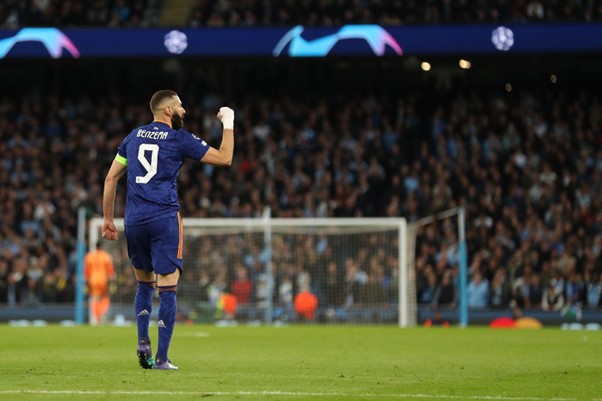 Today we’re going to take a look at the centre-forward landscape across Europe’s top five leagues.

It’s an interesting time to take stock of strikers at the top-level: traditional number nines have had something of a revival over the past couple of seasons and many of Europe’s elite sides are in the market for a striker.

Plenty of the world’s best goalscorers play wide or across the frontline, so we’re just looking at players who played 50% or more of their games in 21/22 through the middle. Who is the best of the best, then? Let’s get into it…

It’s impossible to look past the Frenchman here. The Real Madrid striker had a talismanic impact on Los Blacos last season, both in the league and on the continent.

He was the top scorer in both the Champions League and La Liga and glued together an otherwise inexperienced frontline. In the UCL knockout stage – which defined his side’s season – Benzema averaged a goal every 58 minutes.

With huge goal and assist output, big performances on the big stage and the biggest trophies on offer to show for his efforts, Benz’ stands alone as the best striker in the world right now.

He may not quite have carried his side in Europe or demonstrated the creative capabilities that Karim Benzema did last season but, when it comes to pure goalscorers, the Bayern Munich man is as good as it gets.

Lewandowski was the only player to break 30 goals across Europe’s top five leagues last season and did so with room to spare, finishing on 35.

On average, he scored over a goal per game across all competitions last season. It’ll be intriguing to see how he fares in La Liga if a move to Barcelona does materialise.

It’s easy to dismiss Mbappe’s achievements due to the perceived quality of Ligue 1, but perhaps it’s somewhat unfair.

The young Frenchman had more goals and assists than any other player across Europe’s top five leagues but is only joined by one other Ligue 1 player in that top ten list.

Mbappe can, of course, play across the frontline. When starting as a centre-forward last season, though, he scored 27 and assisted 17 in 37 matches.

The fact that he has a combined 56 goals and assists in 53 Champions League games to date should be enough to dispel the idea that his output is disproportionately boosted by the league he plays in.

A slow start and a lack of trophies count against the Englishman here, but the level he performed at for the second half of the season would have him battling it out at the top of our list.

A peerlessly reliable goalscorer when it comes to centre-forwards in the Premier League with a much broader skillset than most, Kane is one of the most complete strikers in the world. Although it’s hard to make a case that he should be any higher when you take into account what the other players in our list so far have achieved.

By far the least established name on our list, Patrik Schick made the world stand still with his stunner against Scotland last summer, but he’s no one-hit wonder.

Schick played over 2,000 minutes in league competition and averaged over a goal per game. Across Europe’s top five leagues, the only other player that this is true of is Robert Lewandowski.

If you exclude penalties, which can skew the numbers in these conversations, Schick has the best goals per 90 rate of any player across Europe’s top five leagues.