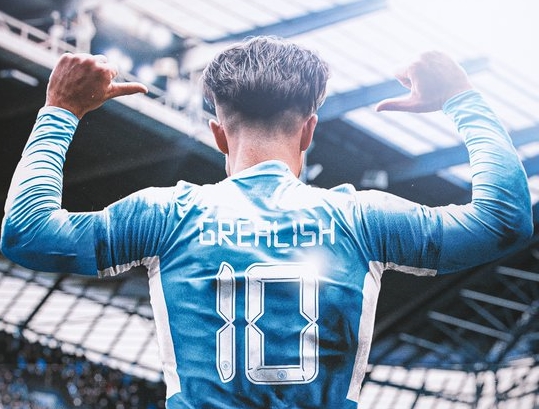 Manchester City (1/10 – Premier League Outright) produced a stirring comeback to draw 2-2 at West Ham United on Sunday and ensure the destination of the Premier League trophy will be in their hands going into the final day of the season.

The Citizens arrived at the London Stadium three points clear of second-place Liverpool, who travel to Southampton on Tuesday night (Southampton 13/2, Draw 9/2, Liverpool 2/5 – Match Betting), and victory in the capital would have been another step towards retaining their league crown.

However, a brace from English forward Jarrod Bowen put the Hammers 2-0 ahead at the break and left City requiring a big effort in the second half if they were going to get back into the contest.

That’s exactly what Pep Guardiola’s men did with a strike from England international Jack Grealish (pictured) and a Vladimir Coufal own-goal getting the visitors back level with just over 20 minutes of the match remaining.

City passed up a glorious chance in the dying minutes when Riyad Mahrez’s penalty was saved by Lukasz Fabianski and the reigning champions had to settle for a share of the spoils, a result that still leaves the title in their hands.

If Liverpool lose at St Mary’s on Tuesday, the Citizens will be crowned champions, but if the Reds come away with at least a point then the battle for the title will go down to the final day.

Elsewhere on Sunday, there were three huge games at the bottom of the table, starting with Burnley as they suffered a 1-0 defeat at Tottenham Hotspur, who leapfrogged Arsenal into fourth and are 8/11 to finish in this position.

Defeat for the Clarets presented Leeds United with the opportunity to jump out of the relegation zone if they could get something from their clash against Brighton at Elland Road.

The Seagulls were ahead at the break thanks to Danny Welbeck’s goal, only for Pascal Struijk to grab a dramatic equaliser in stoppage-time to hand the Whites a share of the spoils and send them one point clear of the drop zone.

In the late match, Everton knew a victory would secure their top-flight status for another season but they suffered a 3-2 home defeat to Brentford in a contest that saw the hosts end with nine men.

Dominic Calvert-Lewin put the hosts ahead in the 10th minute before Jarrad Branthwaite was shown a straight red for a last-man challenge on Ivan Toney, sending the Toffees down to 10.

Seamus Coleman then put through his own net before Richarlison scored a penalty in first-half stoppage-time to give Frank Lampard’s men the lead for the second time in the game.

However, Brentford’s extra man proved crucial after the break as goals from Yoane Wissa and Rico Henry put them 3-2 ahead before Everton striker Salomon Rondon was then given his marching orders for a crazy two-footed challenge.

A victory for Everton would be enough to see them safe, while three points for the Clarets would put them two clear of Leeds heading into the final day of the campaign on Sunday.