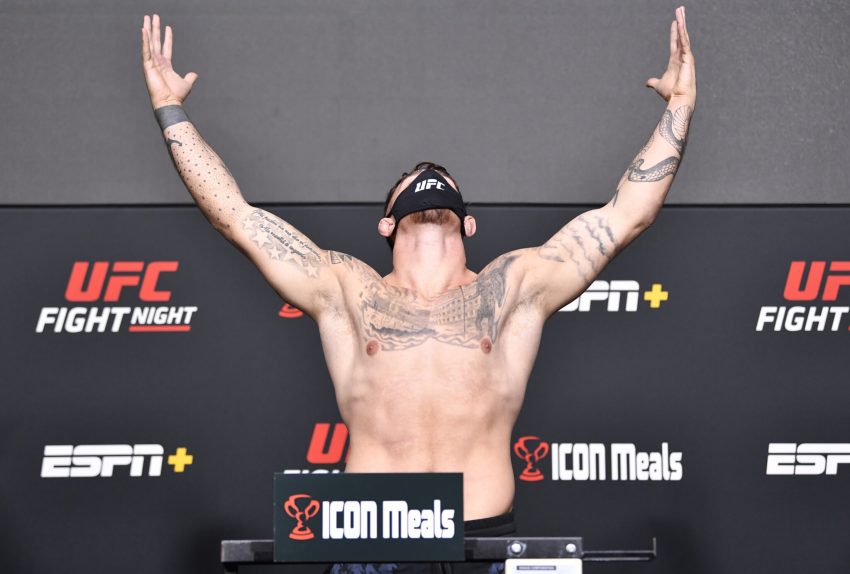 The UFC finally returns to the UK this weekend after a three-year absence.

Not since Darren Till’s loss to Jorge Masvidal in 2019 have we seen MMA’s premier promotion grace these shores, and it would be fair to say British MMA has never been in a better place.

Since 2019 we’ve seen some new fighters, and characters, emerge. And they’ll all be looking to make their impact on home turf.

Let’s take a look at the main event, as well as the rest of the main card at the o2…

When we talk about emerging stars, look no further than Tom Aspinall.

Fighting out of Team Kaobon in Liverpool, his rise has been meteoric, registering three TKO wins and a submission victory since he entered the UFC in 2020.

Alexander Volkov however will be a massive step up for Aspinall, with the Russian having faced the elite of the heavyweight division, admittedly with mixed results.

This one should give us a real indication as to whether the hype around Aspinall is justified.

With that said, it’s a nice match up for the Brit stylistically, with Volkov likely having no desire to go to the ground as well as lacking true KO power.

On the face of this and looking at the odds, this fight involving Ipswich’s Arnold Allen and New Zealander Dan Hooker could go either way.

But this might be another case of Allen maybe not receiving the respect he deserves, especially given he is on a massively impressive eight-fight win streak since he entered the UFC.

Hooker is always dangerous on the feet even if he is coming off three losses in his last four – which were against the cream of the crop at lightweight – and it will be interesting to see how he fares at featherweight.

Allen on points at 13/8 could be the bet here and having him just to win on your acca could provide great value.

Since entering the UFC in 2021, Paddy ‘The Baddy’ Pimblett has taken the world of MMA fandom by storm, instantly becoming somewhat of a cult hero among fans, especially on the internet.

There’s no doubting Pimblett has personality in spades, but whether his skills can match up to the expectations his charisma have created remains to be seen.

Some may feel the hype surrounding Pimblett is unwarranted, but that’s likely to be a question that will only be answered in future matchups, as the Liverpudlian should take the victory here via superior grappling.

Pimblett by submission is 15/8.

After two and a half years out of the octagon Gunnar Nelson returns to the octagon looking to break a two-fight losing streak.

Takashi Sato, Japanese judo specialist, will be looking to overcome the odds as he comes in as a late injury replacement for Claudio Silva.

Both men are patient on the feet but are capable of lethal bursts when opportunity presents.

Expect some tentative striking with Nelson attempting to shoot, potentially leading to him taking Sato’s back.

Nelson by submission at 10/11 is probably the obvious bet here.

Fighting out of Next Generation MMA alongside the likes of Paddy Pimblett, Molly McCann may have been in danger of her UFC career coming to an end.

But in her last fight against Ji Yeon Kim the Liverpudlian impressed, winning a unanimous decision and securing her place on the card here in London.

And that could be vital for ‘Meatball’ as she seems like the type of fighter who will thrive with a home crowd at her back.

With that said, Luana Carolina will prove a tough opponent, and frankly this one is a toss up.

But we’ve got to go with McCann to win it in front of her home fans.

Illia Topuria made headlines this week thanks to a behind the scenes altercation with fellow UFC London competitor Paddy Pimblett.

But it’s the ‘Black Country Banger’ Jai Herbert with whom he’ll actually step into the octagon with as a replacement for Mike Davis, which sees him move up a division.

Herbert had his struggles when he first entered the UFC, losing his first two bouts, but he did show moments of promise in those defeats.

He then got his first win under his belt in the big leagues back in October of 2021, TKO’ing Khama Worthy out in Las Vegas.

Herbert is a rangy striker with a large frame for the weight, but that may all be for naught in this one as Topuria’s grappling credentials should negate the size difference.

It should be a good night for the Brits all around, but the main card may begin in defeat as the German-born Georgian should take the opening contest.

Check out all of these bouts as well as the undercard odds HERE.