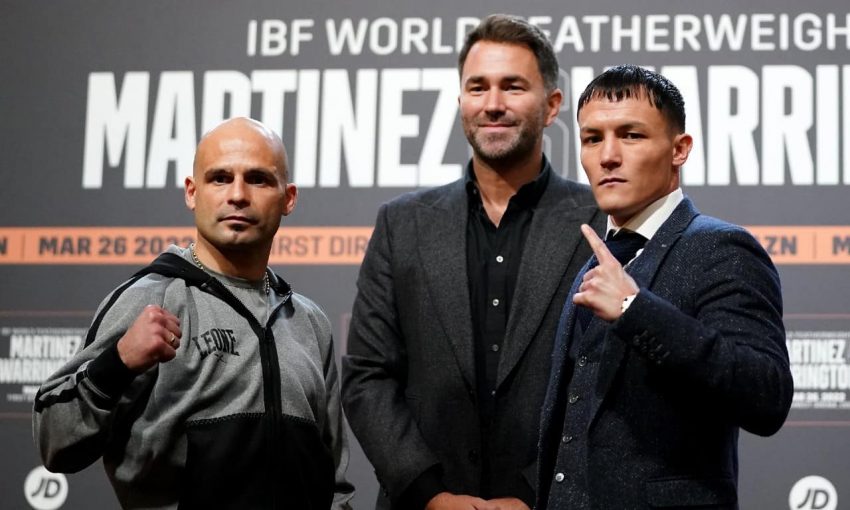 The Leeds Warrior Josh Warrington looks to regain the IBF world featherweight title belt as he takes on Spanish strap-holder Kiko Martinez for the second time this weekend and we have some Warrington v Martinez betting tips and a preview of all the action.

Martinez claimed the belt Warrington had previously vacated when flooring Kid Galahad in the sixth round to record a shock upset and become a two-weight world champion, and although now aged 36, the Alicante man will be out to avenge the defeat he suffered to Warrington in the same First Direct Arena back in 2017.

The hometown hero is a heavy favourite at 2/7 to become a two-time world champion, while Martinez can be backed at 11/4, with a stadium unification fight with WBA title holder Leigh Wood potentially next for the winner of what is sure to be an all-action bout.

First bell for the main event at Leeds’ First Direct Arena is scheduled for around 10pm and all of the action is live on DAZN.

It is fair to say the gamble Eddie Hearn and Matchroom took when re-signing Warrington is yet to pay dividend and he is potentially one loss away from the curtain coming down on a decorated career that has so far yielded just one defeat from 32 tough fights.

Having ripped away the IBF belt from Lee Selby in a historic event at Elland Road in 2018, the qualified dentist then defended his title in two British-barnstormers with Carl Frampton and Galahad before relinquishing the belt on the advice of Hearn to target a career-defining Las Vegas night all fighters dream of. With the belt discarded, disaster struck in what was supposed to be a tick-over interim fight with unheralded Mexican Mauricio Lara, Warrington taking severe punishment from the hard-hitting Central American before being stopped in the ninth.

Vegas dreams went up in smoke before Warrington’s eyes and with little option but to rematch Lara and hope for revenge, the second stanza was set for Headingley in September 2021.

However, again things didn’t go to plan, with the bout called to a halt after only two rounds with a head clash resulting in Lara suffering a bad cut above his left eye. Warrington now steps into the ring with Martinez for a second time and defeat to the 36-year-old will surely mean hanging up the gloves for a man who has become something of a folk hero for the people of Leeds, but has perhaps so far not received the worldwide adulation some of his in-ring performances have deserved.

The duo first met in 2017 when Warrington was building towards his first world title shot and got the better of a majority decision before claiming world honours against Selby at Elland Road a year later.

Two scorecards of 116-112 were in Warrington’s favour, while the third judge was unable to separate the two game fighters with his card reading 114-114. Many felt Martinez did enough to have his hand raised in what was a close and hard-fought scrap, but not for the first time, the scorecards favoured the home fighter.

The duo return to the First Direct Arena to become dance partners once again and with all the talk of judging controversies in recent months, Martinez will be keen to rewrite the record books in West Yorkshire.

On paper this reads as a hungry home favourite desperate to get his belt back against a 36-year-old cashing in on a fluke victory last time. If boxing was that simple, let’s give Warrington the belt now in Warrington v Martinez betting tips and all head off to the bar.

However, Warrington has fought just twice since 2019, with his last victory coming in the October of that year against tame mandatory challenger Sofiane Takoucht, who barely made it through the first round of a one-sided beat down. Since then he was firmly put in his place by Lara and was perhaps saved from having his career prematurely ended when the Headingley Stadium rematch was called off early.

Warrington has never been shy of taking a shot to get one of his own off, but as Galahad will testify Martinez is not the man to be taking too many chances with. Having chewed plenty of leather in his nine-round battering from Lara, could there simply be too many miles on the clock in a 32-fight career that has seen just nine of those bouts end within the distance?

With all that taken into consideration and with Warrington’s low knockout percentage it seems the Leeds fighter’s best chance of victory will be by decision at 5/6 in Warrington v Martinez betting tips.

Although loathed to say it, Warrington’s hometown status could help in achieving that method of victory, but he may have to produce a more varied style of attack which we haven’t seen from him in the past to get past a grizzled pro of over 15 years.

If Warrington persists in standing square on for a tear-up with the Spaniard, it brings a Martinez victory by KO/TKO into the equation at 7/2. It took Martinez until the midway point of the fight to tame Galahad when winning the IBF belt and he is unlikely to rush his work early doors. If he is to stop Warrington it may be worth siding with Martinez to win in rounds 5-8 at 9/1 or rounds 9-12 at the same odds in Warrington v Martinez betting tips.

Warrington isn’t afraid to get rough and ready and it would be no surprise to see the heads come together at some point in the fight. With that in mind it may also prove wise to keep the draw/technical draw onside at 20/1 in case there is a repeat of the Lara rematch and either fighter is unable to continue following an early cut.