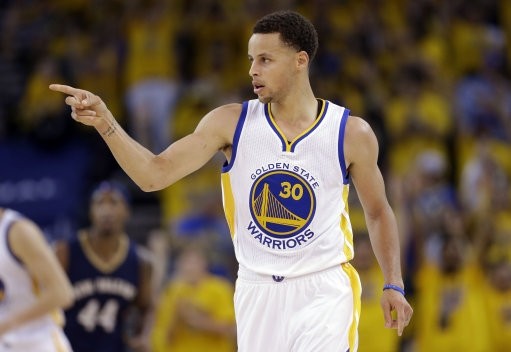 Late scores from Steph Curry helped the Golden State Warriors (15/8 NBA Championship – Outright) come from behind to secure a 101-98 win over the Memphis Grizzlies on Monday and open up a 3-1 lead in their Western Conference semi-final series.

Curry produced a game-high 32 points, but it was his key efforts from the free-throw line in the final minute that helped the Warriors (8/11 Western Conference – Outright) secure the victory that has moved them within one win of reaching the Conference Finals for the sixth time in eight seasons.

The Grizzlies had looked on course to level the series, despite being without the injured Ja Morant, as they at one stage held a 12-point lead and never fell behind in the contest at the Chase Center until Curry’s free-throw heroics.

It was certainly a memorable night for two-time MVP Curry, who also became the first player in NBA history to make 500 career three-pointers in the playoffs, and after the game he insisted he always felt the Warriors were capable of getting back into the contest.

“Nothing we figured out, it was just don’t let the first three quarters influence the fact that we still had a chance to win the game,” Curry told reporters after the game.

“Shoot the shots you think you can make, play aggressive, take care of the ball. We did all of those things.”

Game Five of the best-of-seven series will be held at the FedExForum in Memphis during the early hours of Thursday morning.

There was also a comeback victory in the Eastern Conference, as the Boston Celtics came from 11 points behind to beat reigning champions the Milwaukee Bucks 116-108 at the Fiserv Forum to level their series at 2-2.

Al Horford was one of the stars of the show for the Celtics, contributing a career-high 30 points in the playoffs, the same number as team-mate Jayson Tatum.

The Celtics will now have home-court advantage for two of the final three games in the series, starting with Game Five at the TD Garden, which is scheduled for a midnight start on Thursday (Celtic 5/12, Bucks 15/8 – Money Line).

The remaining two playoff series will take centre stage during the early hours of Wednesday morning, with the Miami Heat taking on the Philadelphia 76ers at the FTX Arena with the two teams locked together at 2-2 apiece in the series (Heat 8/13, 76ers 13/10 – Money Line).

It is also all-square in the series between the Phoenix Suns and the Dallas Mavericks, although it will be the top-seeded Suns that will have home-court advantage for Game Five (Suns 3/8, Mavericks 21/10 – Money Line).