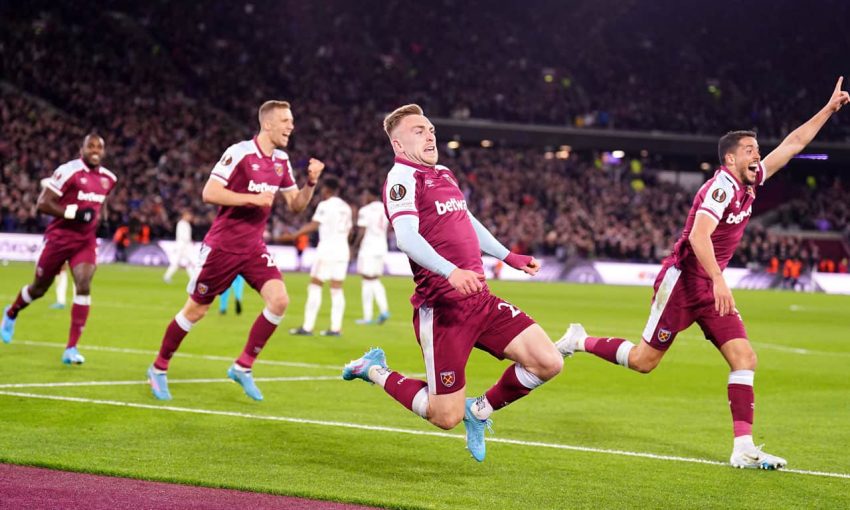 West Ham are appearing in a first European semi-final in 46 years and are odds-on to secure a first-leg lead to take to Germany.

Barcelona are no longer standing in their way of Europa League glory as we study the odds to find some West Ham v Eintracht Frankfurt betting tips.

The first leg takes place at the London Stadium on Thursday April 28 with an 8pm kick-off and is live on BT Sport.

West Ham booked their place in the last four of the Europa League with a stunning 3-0 victory in the second leg against Lyon.

David Moyes’ side were big underdogs heading to the city overlooked by the French Alps following a 1-1 draw in the first leg at the London Stadium.

But it was hosts Lyon who were left with a mountain to climb after two goals in seven minutes at the end of the first half from Craig Dawson and Declan Rice put West Ham in control. When Jarrod Bowen made it 3-0, and 4-1 on aggregate, Lyon heads dropped as the price of flights to Frankfurt rocketed – Eintracht Frankfurt having shocked Barcelona in their last-eight clash to reach the last four and book a meeting with the Hammers.

It has been a remarkable season for West Ham already, having topped their group and sent six-time winners Sevilla packing, and it could be about to get better given they are 5/6 to win the first leg.

The Hammers are 5/2 to be held to a draw, just as they were by Lyon, while Eintracht Frankfurt are 17/5 to win at the London Stadium just as they did at the Nou Camp.

West Ham were expecting to face Barcelona in the semi-finals but it is now Frankfurt that stand between the Premier League outfit and a place in the final.

As with West Ham, the Germans were up against it after a 1-1 draw in the first leg on home soil but Filip Kostic’s fourth-minute spot-kick opened the scoring at the Nou Camp and Rafael Borre extended their lead with 36 minutes on the clock.

A second for Kostic had the Germans in dreamland and although Sergio Busquets and Memphis Depay (penalty) scored in added time, it could not prevent a painful loss for Barcelona.

EINTRACHT FRANKFURT HAVE DONE IT!! 🤩

They’ve beaten Barcelona at home to make it to the Europa League semi-finals to face West Ham! ⚒️

What an incredible performance 🙌#UEL pic.twitter.com/S0OeXVeAIn

Frankfurt also beat Spanish opposition in the round of 16 with a 3-2 aggregate victory over Real Betis but are only mid-table in the Bundesliga, although their away form has been better than their home form.

That was emphasised by a 2-1 win at Bayern Munich in October so scoring goals on the road does not seem to be an issue and both teams to score is worth considering for West Ham v Eintracht Frankfurt betting tips at 4/5.

The Europa League showdown will coincidentally be a repeat of West Ham’s last appearance in the last four of a major European semi-final, in 1976.

In fact, the victory against Lyon took place 40 years ago to the day since Trevor Brooking, Billy Bonds and company stunned the Germans 3-1 in the second leg at Upton Park to reach the final of the European Cup Winners’ Cup.

Frankfurt had won the first leg 2-1 but could not prevent West Ham reaching the final, which they lost 4-2 to Anderlecht.

Veteran midfielder Mark Noble, in his final season at West Ham after 18 years at the club, was sent on by manager Moyes for the final quarter of an hour in Lyon to help see the match out.

The club captain was in tears in the dressing room afterwards but there is a growing feeling that Noble’s swansong could yet see him lifting West Ham’s first piece of major silverware since 1980. The Hammers are now the 15/8 second favourites in the Europa League outright betting and Frankfurt’s domestic form gives them plenty of hope considering they have only won three league games since the start of 2022.

West Ham have had a dip in form on their travels recently but are unbeaten at home in their last eight matches in all competitions.

Four of their five wins in that time have been by a one-goal margin and the same outcome here is a decent option for West Ham v Eintracht Frankfurt betting tips at 13/5.

For bigger odds, West Ham are 15/2 for a 2-1 win which they have enjoyed against Aston Villa and Everton in two of their last three league games here.