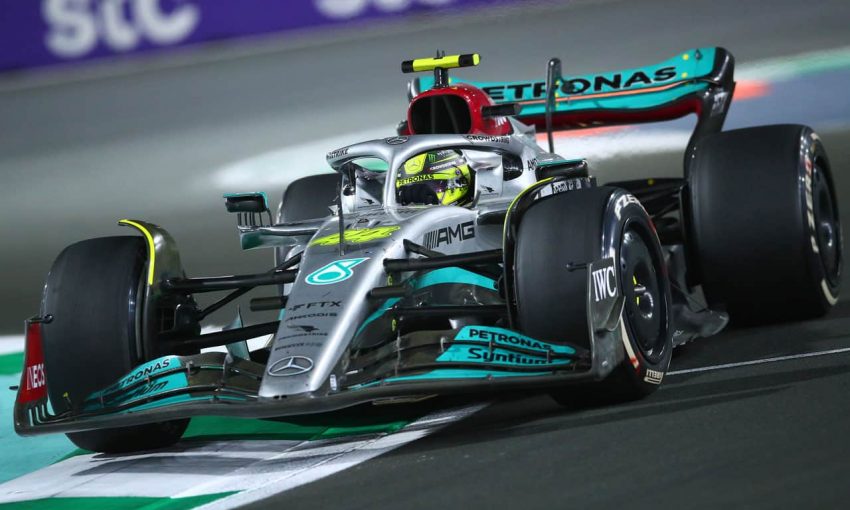 Analysis of the problems for the Mercedes team

Lewis Hamilton’s Mercedes team are in the midst of a mini crisis following their underwhelming start to the new Formula One season.

The Silver Arrows have dominated the sport since 2014 – carrying Hamilton to six world championships and winning an unprecedented eight constructors’ titles in succession.

But Hamilton and team-mate George Russell have all but written off their aspirations unless Mercedes can radically improve its underperforming car.

Hamilton’s fidgety demeanour on the first day of testing was a clear indicator that all was not well in the Mercedes camp.

When asked if he feared Mercedes might not be able to deliver him a machine to win an eighth title, Hamilton snapped: “Why would I feel that way? Why would I ever think that?

“We have won eight constructors’ championships in a row. My team don’t make mistakes. Whatever we start with today, whether it is good or bad, we will work through it.”

The abruptness of Hamilton’s reply to a legitimate question reflecting the sport’s dramatic change in regulations was telling.

Did he already know the Mercedes team were playing catch-up?

Hamilton ended the final test saying he would not be in a position to fight for victory, and he’s been proven right after finishing a somewhat fortunate third – following Red Bull’s late double DNF in Bahrain – and then a lowly 10th last weekend in Saudi Arabia.

Mercedes’ season has been derailed by ‘porpoising’ – the phenomenon seen this year when the car violently bounces on its suspension at high speed.

The problem caught Mercedes completely off guard, and Russell said it is the source of 99 per cent of the team’s problems. Why is it such a big deal?

An F1 car delivers performance when it runs low to the ground, but Mercedes are having to run the car higher in order to mitigate the bouncing.

There are a number of side-effects created by the bouncing – including more drag – which means the car is slower in a straight line. The car is also unstable under braking and overworks the tyres.

Does this only happen to Mercedes?

Virtually every team has been affected by ‘porpoising’, but Red Bull and Ferrari have managed to get on top of it.

Mercedes were one second slower than their rivals in Saudi Arabia – with Russell half-a-minute behind winner, Red Bull’s Max Verstappen, and Hamilton even further back.

Is ‘porpoising’ the only issue?

Hamilton also said he needed more power with Mercedes’ engines no longer the dominant force they once were.

The Silver Arrows are also coming in over the minimum weight limit of 798 kilograms. A heavy car is a slow car.

Can Mercedes fix the problems?

A Mercedes source told the PA news agency it is “naive to think there will be a magic bolt for the next round” in Australia, but that the team “hopes to see progress within two to three races”.

Russell was in the team’s simulator on Tuesday, with Hamilton expected at the factory later this week. Mercedes are confident they have fundamentally a fast machine.

But with Russell already 23 points adrift of championship leader Charles Leclerc and Hamilton 29 points behind the Ferrari driver, a resolution to the Mercedes team’s early-season woes might arrive too late to save either man’s campaign.

Hamilton has already drifted to 7/1 to regain the drivers’ title in the F1 betting, with Russell 25/1, while Mercedes are 6/1 to retain their constructors’ title.

What does it mean for Hamilton?

Hamilton toyed with his future after last season’s contentious championship defeat to Verstappen. And, although he insisted his decision to race on was not motivated by revenge, it seems implausible to think Hamilton does not want to get his own back on Red Bull and Verstappen.

However, the 37-year-old is driven by winning and he will not want to be in F1 just to make up the numbers. His £40million-a-year contract with Mercedes is due to expire at the end of next season, but there will be question marks over his future if Mercedes fail to improve. Following consecutive races in Bahrain and Saudi Arabia, the F1 season recommences in Melbourne a week on Sunday before rounds in Imola (April 24) and Miami on May 8.

The problems Mercedes are enduring are highlighted by the fact that Hamilton is 14/1 in the Australian Grand Prix odds, with Verstappen (5/4) and Leclerc (6/4) expected to be battling for victory.